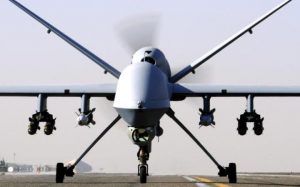 An RAF Reaper drone interrupted a public execution by the Islamic State group after opening fire on the militants and driving them off, the Ministry of Defence has said, like reported by telegraph.co.uk.

The remote-controlled aircraft disrupted the display in a Syrian town by killing a sentry with a Hellfire missile.

Details of the incident on May 9 were revealed on Tuesday by the MoD.

The Reaper was flying an armed reconnaissance mission when it spotted a group of fighters from Islamic State in Iraq and Levant (Isil), also known as Daesh, in a main street in the town of Abu Kamal.

A statement from the MoD said: “When a van then unloaded two shackled prisoners in front of the crowd, it became clear that Daesh were organising a public execution.

“Given the large number of civilians present, the Reaper’s crew could not target directly the Daesh fighters about to carry out the murders.”

The Reaper pilots, who are believed to have been flying the aircraft by satellite link from RAF Waddington in Lincolnshire, spotted two Isil fighters posted as sentries on a nearby roof.

The statement said: “A Hellfire missile was fired immediately, and scored a direct hit which not only killed one of the sentries but also brought the execution to an immediate halt, as the Daesh fighters fled the scene, and the crowd of civilians dispersed.”