You are here: Home / MidEastGulf / Syria: Putin and Trump agree on safe zones 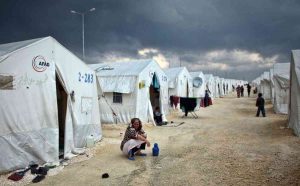 Russia and the United States have agreed to establish safe zones for civilians affected by the Syrian civil war, according to Russian President Vladimir Putin.

Putin said Wednesday that he had a “very good” conversation with President Trump in which the two leaders agreed to the proposal to establish the safe zones, Bloomberg reported.

“We spoke about this with Mr. Trump,” Putin said. “As far as I understood, the American administration supports these ideas.”

According to the Bloomberg report, the plan would involve the creation of four safe zones in Syria, which would be patrolled by Russian, Turkish, and Iranian troops.

The US has not confirmed that the two leaders reached an agreement on the protection of Syrian civilians.

Trump had repeatedly called for the establishment of safe zones to protect Syria’s civilians as an alternative humanitarian solution to accepting thousands of refugees fleeing the civil war, in which approximately 500,000 people have been killed since 2011.

The US and Russia have had conflicting policies on Syria, especially since a chemical weapons attack on civilians in Idlib, Syria last month, in which roughly 100 people were killed and which much of the international community blames on the regime of Bashar Al-Assad.

Russia, an ally of Assad which has intervened militarily in Syria to support his rule, has defended Assad from the accusations that he has committed war crimes and crimes against humanity. Russia condemned the US firing of 59 Tomahawk missiles at a Syrian air base in response to the chemical weapons attack last month.