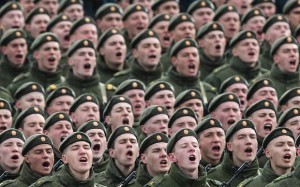 A leading defense research group has distributed what it says is satellite imagery that suggests Syria may be preparing to receive Russian forces.

IHS Jane’s said Tuesday that images dated a day earlier show construction of new buildings, surface clearing, the grading of terrain and the presence of tents like those used by Russian military units at the Istamo weapons storage complex and Al-Sanobar military complex north of the Syrian coastal city of Latakia.

The publication said images also showed “a substantial increase in fast jets stationed on the runway.”

Russia has said it has been sending military supplies to Syria and advisers, refusing to comment on the reports of an armed build-up.

“These new discoveries highlight how the rapid build-up of Russia’s expeditionary force in Syria is continuing apace, giving it significant capability to target rebels opposed to the Syrian government and to secure the Latakia homeland of President Bashar al-Assad,” Robert Munks, editor of IHS Jane’s Intelligence Review, said in the report. “That said, we assess that Moscow is keeping its options open, will not prop up the Syria regime at any cost, and may even be preparing its contingencies for the eventual downfall of President Assad.”

Russia has backed Assad throughout the civil war. The Kremlin last week said it is willing to consider sending troops into combat if its longtime ally requests help.

Officials from across the region have visited Moscow for diplomatic talks recently as the conflict pushes hundreds of thousands of migrants to seek refuge in the European Union.

At the same time, Russia is sending signals to the U.S. and Saudi Arabia that it may allow Assad to be eased out of power as it seeks to forge a united front against the Islamic State group and retain influence in the region, officials and Syrian opposition leaders said.

Russia, which has a naval base in the Mediterranean port of Tartus, has set up a forward air operating base near Latakia, the ancestral homeland of Assad that could be used for bombing raids, according to U.S. officials. It has stationed 28 fighter aircraft and possibly six attack helicopters at the base, IHS Jane’s said, citing satellite imagery dated Monday.

U.S. officials say there are also about 20 Russian combat and transport helicopters, and that Moscow is operating drones.

“They are not going to sit around,” said Jeffrey White of the Washington Institute for Near East Policy. “This kind of aircraft suggests that the Russians intend to exert their combat power outside of Latakia in an offensive role.”

Fears have been growing of an accidental confrontation between Russian forces and the U.S.-led coalition that has been carrying out airstrikes against the Islamic State group in Syria for more than a year.

Western diplomats suggest that Russian President Vladimir Putin, isolated over the Ukraine crisis, is trying to switch the focus to Syria ahead of a key address next Monday to the U.N. General Assembly.

Anthony Cordesman of the Washington-based Center for Strategic and International Studies said Russia is seeking to assert itself in the region. “Putting aircraft means that everybody has to pay attention to Russia,” he said. “Even if you fly a few demonstrative sorties, that will give you leverage.”