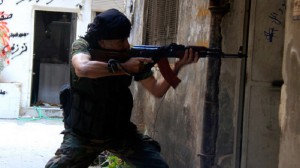 Syria said it is ready to offer Palestinians its firepower to support their battle with ISIS in a refugee camp devastated by clashes and aerial attacks, according to Straitstimes.

The deteriorating humanitarian situation in the Yarmuk camp has pushed the United Nations Security Council to demand greater access to residents trapped between the encroaching ISIS (Islamic State in Iraq and Syria) militants and besieging government forces.

The fierce clashes that began on April 1 have ceased, but regime forces continue to drop barrel bombs on the camp, which lies six kilometres from central Damascus.

In the capital, Deputy Foreign Minister Faisal Meqdad met with a delegation from the Palestine Liberation Organisation headed by Ahmad Majdalani.

“Syrian authorities are ready to support the Palestinian fighters in a number of ways, including militarily, to push ISIS out of the camp,” said PLO official Anwar Abdul Hadi, who was at the meetings.

Meqdad said the “Syrian government had used all its efforts to present humanitarian and medical aid to Palestinian refugees and that it had helped them exit Yarmuk safely.”

“Syria and the PLO are determined to fight terrorism, which has reached Palestinian camps in Syria, notably Yarmuk,” he said, quoted by the official SANA news agency.

Speaking after meeting with Meqdad, Majdalani said they had “agreed on the need for a unified position for the Palestinian forces in Syria, in coordination with the Syrian government”.

He said there would be continued cooperation between Syrian and Palestinian leaders “to defeat terrorism in Yarmuk”.

A meeting among Syria’s Palestinian factions is set for Wednesday to discuss a broader consensus.

If achieved, this rapprochement would be significant for Yarmuk, which had seen fierce clashes since the end of 2012 between regime forces and rebels supported by Palestinian groups.

Most of the Palestinian factions in Yarmuk are opposed to the regime of President Bashar al-Assad.

But ISIS arrival to Yarmuk sounded alarm bells in Damascus, as it was the closest extremists had ever been to the capital.

“I used to call the camp a big prison… Now, it’s different, it’s even worse,” Samer told AFP via Skype from inside the camp. “There was a young man who was killed next to my house by barrel bombs. We picked him up in pieces.”

Most of the camp’s doctors had already fled, leaving only paramedics to care for the wounded.

A sniper shot dead a 12-year-old girl Tuesday on the edge of Yarmuk, another resident said, describing her as a child who “loved singing, music and playing the drums”.

On Monday, the Security Council called “for the protection of civilians in the camp for ensuring humanitarian access to the area”, said Jordan’s ambassador Dina Kawar, the council chair this month.

In a meeting with the council, Pierre Krahenbuhl, who heads the UN agency for Palestinian refugees, UNRWA, described the situation as “more desperate than ever” for the camp’s roughly 18,000 remaining residents.

“What civilians in Yarmuk are most concerned about right now is bare survival,” he said.

Since 2012, Yarmuk has been under a nearly-impenetrable regime siege that has left about 200 people dead due to malnutrition and lack of medication, said the Syrian Observatory for Human Rights.

IS began an assault on Yarmuk last Wednesday and was initially repelled by Palestinian fighters but has since seized large swathes of the district.

At least 39 people, among them eight civilians, have been killed in the fighting, the Observatory said.

The Britain-based monitor said IS forces were present in the south, west and east of the camp, with Palestinian fighters largely confined to the north.

The ISIS attack is just the latest blow for Yarmuk, which was once a thriving, working-class residential district of the capital, home to some 160,000 people, Syrians and Palestinians.

In violence elsewhere on Tuesday, at least seven people were killed, including two military commanders, in a car bomb blast targeting a base used by Islamist groups including Al-Nusra Front in Marea, a town in Aleppo province of northern Syria, the Observatory said.