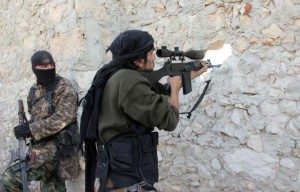 The al Qaeda-linked Nusra Front has withdrawn from frontline positions against Islamic State north of Aleppo and ceded them to other rebels, leaving an area of northern Syria where Turkey wants to establish a buffer zone.

A Nusra Front statement dated Sunday criticised a Turkish-U.S. plan to drive Islamic State from the Syrian-Turkish border area, saying the aim was to serve “Turkey’s national security” rather than the fight against President Bashar al-Assad.

The Nusra Front, an enemy of Islamic State, said participation in the campaign was forbidden.

The United States and Turkey last month announced their intention to drive Islamic State fighters from a strip of territory in northern Syria near the Turkish border, providing air cover for Syrian rebels in the area.

Islamic State, the focus of a U.S.-led military campaign in Syria and Iraq, controls a strip of territory north of Aleppo that abuts the Turkish border.

Nusra said the Turkish government and the U.S.-led alliance against Islamic State were seeking to direct the battle according to their interests and priorities, and said Syrian groups taking part were not doing so of their free will.

“Facing this current scene, our only option was to withdraw and leave our frontline positions (with Islamic State) in the northern Aleppo countryside for any fighting faction in these areas to take over,” the Nusra Front said.

It added that the Nusra Front would maintain frontlines with Islamic State in other areas including Hama province and the Qalamoun mountain range near the border with Lebanon.

Last month, the Nusra Front said it had detained U.S.-trained rebels in northern Syria and warned others to abandon a programme to train and equip an insurgent force to fight Islamic State.

The Nusra Front said the Turkish government’s plan to establish a buffer zone aimed to prevent the establishment of a Kurdish state at its southeastern border.

The Syrian Kurdish YPG militia, a U.S. ally in the campaign against Islamic State, controls some 400 km (250 miles) of the border to the northeast of Aleppo.