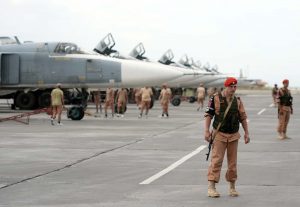 Moscow confirmed that its jets would not provide air coverage to Syrian regime forces in their “southern battle,” if Iranian-linked militias are allowed to participate in it, like reported by aawsat.com.

The Russian Hmeimim airbase announced in a statement posted on its Facebook page that “Iranian forces and Hezbollah should withdraw from southern Syria, or else Syrian regime forces would not be provided with any support from Russian forces in the upcoming battle in the province of Daraa.”

The statement added: “We have fears of losing this battle in the absence of Russian launchers, which helped Syrian regime forces win several battles.”

During the weekend, Secretary of Iran’s Supreme National Security Council Ali Shamkhani denied that any Iranian forces were present in southern Syria.

Political sources in Tel Aviv said the advanced Russian-Israeli talks led to an understanding to keep Assad’s forces and to allow their deployment at the border with Israel, in exchange for the withdrawal of Iranian fighters from Syria.

Meanwhile, Turkey’s Foreign Minister Mevlut Cavusoglu said on Monday he discussed with his US counterpart, Mike Pompeo, the roadmap for northern Syria’s Manbij and the conflict in Syria.

The roadmap stipulates the withdrawal of the PKK-affiliated People’s Protection Units (YPG) group from the northern Syrian city and the establishment of a local council responsible for municipal services, taking ethnic distribution of the population into consideration.