You are here: Home / MidEastGulf / Syria: more than 90 members of the “Islamic State” killed 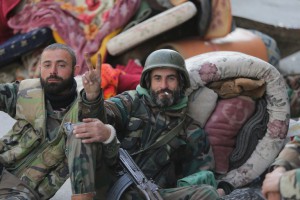 The sound of explosion was heard in al-Qameshly downtown in the area controlled by the regime forces, but no information about the cause and the nature of the explosion, while the Syrian Observatory for Human Rights knew that at least 50 member of the “Islamic State” were killed during the attack which initiated by the organization at the 2nd of this month on the villages at the surroundings Mount Abdul-Aziz at the southwestern land of Tal Tamr town and the western countryside of the city of Al-Hasakah in clashes against YPG, while 8 fighters from YPG died and more than 13 others wounded in the same clashes, also the YPG managed to regain control of 4 villages which was taken by the organization in the same attack.

Violent clashes are still taking place between the regime forces and militiamen loyal to them against the “Islamic state” in the vicinity of Deir Ezzor airbase and other areas in the neighborhoods of al-Sena’aa and al-Ommal in Deir Ezzor, which killed 13 members of the regime forces, also the number of the “Islamic State” members who were killed since 2nd of this month rose to 40 at least, including a nurse, a legitimate and the Deputy of the Administrator of Zakat Office in al-Mayadin city, in addition to the death of several members of the regime forces -including officers- in the same clashes, and the clashes accompanied by shelling by warplanes and by the regime forces on the clash areas, while the Syrian Observatory for Human Rights was informed by reliable sources that the “Islamic State” executed a person from the town of Mhimideh in the countryside of Deir Ezzor on charges of “employment for the regime and transferring a body of a smuggler killed by the organization when he tried to smuggle”, the man was beheaded using a sword at the roundabout of al-Hsan village.