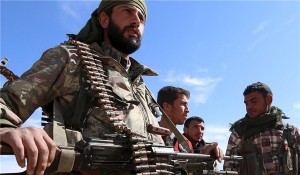 Informed sources disclosed that several commanders of Fatah al-Sham Front (previously known as the al-Nusra Front) have cut off ties with the group that has been attacking other rival militants in the provinces of Idlib and Aleppo in the last several days, according to farsnews.com .

The sources said a growing number of commanders have started defecting Fatah al-Sham after the terrorist group engaged in lethal clashes with al-Shamiyeh Front, Jeish al-Mujahedeen and Faylaq al-Rahman rival militant groups in the Northern and Western parts of Aleppo province and in Northern Idlib.

Fatah al-Sham also has lost some of its bases in the clashes, the sources added.

Military Emir of Fatah al-Sham Abu Abdul Rahman announced that he has cut off ties with the group and joined Ahrar al-Sham along with his forces.

Meanwhile, Soqour al-Sham terrorist group managed to take control over the town of Beinin in Jabal (mount) al-Zawiyeh in clashes with Fatah al-Sham.

Soquor al-Sham also captured the towns of Hantutin and parts of Ma’arat al-Nu’aman in Southern Idlib.

Ahrar al-Sham’s battalions stormed Fatah al-Sham’s positions and seized the checkpoints of Fatah al-Sham along the road to Bab al-Hawa at the entrances of the towns of al-Dana and Sarmada.

On Tuesday, Fatah al-Sham launched the attacks on the positions of other terrorist groups after accusing them of treason in Aleppo battles and penetration of corrupt members into these two groups.

Fatah al-Sham stormed al-Shamiyeh Front’s positions in the towns of Anadan, Hayan and Kafr Hamra in Northern Aleppo and drove them out of their bases.

Fatah al-Sham also laid siege on rival terrorists in al-Dana town in Idlib, and meantime blocked other terrorist groups’ access to all civil services and internet across its territories in Aleppo and Idlib.

Some sources close to the terrorist groups disclosed that Nouralddeen al-Zinki also helped Fatah al-Sham fighters in their attacks against other rival militant groups.

Meantime, the operation Room of Jeish al-Mujahedeen affiliated to the Ankara-backed Free Syrian Army deployed in Western Aleppo announced that all its ranks and files joined Ahrar al-Sham after Fatah al-Sham started attacking militants’ positions in the towns of Ma’ar Shourin, Hazanu and Batbu.

In the meantime, al-Shamiyeh Front announced that all its positions in al-Tamoureh, near Jam’iyat al-Zahra and in al-Rashedeen were under the imminent threat of the Syrian Army attacks as Fatah al-Sham cut off al-Shamiyeh Front’s supplying lines in these battlefields.