You are here: Home / MidEastGulf / Syria Kurds say will get training from Russian forces 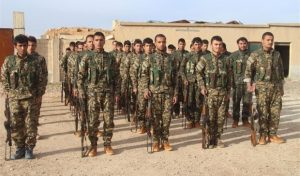 Russia’s military will train Kurdish forces in Syria, a spokesman said Monday, in the first agreement of its kind with the militia that controls large parts of the country’s north, like reported by digitaljournal.com.

The move by Russia, a longtime ally of President Bashar al-Assad’s regime, is likely to anger Turkey, which considers the Kurdish People’s Protection Units (YPG) to be a “terrorist” group.

“An agreement was signed between our units and Russian forces operating in Syria that will train us in modern military tactics,” YPG spokesman Redur Xelil said.

“This is the first agreement of its kind, although we have had previous cooperation (with the Russians) in Aleppo city,” he said.

Russian forces were already present at the training camp in the Afrin region, one of the three “autonomous” cantons that Kurdish authorities manage in northern Syria, Xelil told AFP.

The deal, which Xelil said was part “of the framework of the fight against terrorism,” was signed on Sunday and came into force on Monday.

The YPG makes up the bulk of the Syrian Democratic Forces, a US-backed alliance of Kurdish and Arab fighters that has seized swathes of territory from the Islamic State group in northern Syria.

The SDF receives equipment, weapons and air support from the US-led coalition, and is backed by several hundred Western special operations forces in an advisory role.

Russia, meanwhile, is a long-term backer of Syrian President Bashar al-Assad, but had recently worked closely with rebel supporter Turkey to try to end the six-year war in Syria.