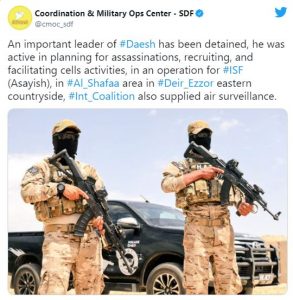 The SDF noted that the Internal Security Forces of northeast Syria, commonly known as Asayish, led the operation, carried out in al-Shafaa in Deir al-Zor’s eastern countryside with air support from the US-led anti-ISIS Coalition.

Col. Wayne Marotto, the Spokesman for the Coalition, also known as the Combined Joint Task Force-Operation Inherent Resolve (CJTF-OIR), said in a tweet on Monday said that the operations conducted by SDF aim to “degrade [ISIS’s] capabilities and lead to their enduring defeat.”

Although the SDF and the Coalition announced the territorial defeat of ISIS in Syria in March 2019, sleeper cell attacks persist, especially in liberated territories, in what appears to be a deliberate campaign to destabilize the area.

According to the latest report by the Syria-based Rojava Information Center, ISIS carried out 40 attacks in northeast Syria in March. The majority of these attacks were carried out in Deir al-Zor, where the SDF and local administration officials have been especially targeted by ISIS insurgent attacks.

SDF-linked forces with the support of the US-led Coalition have carried out several arrest campaigns in Deir al-Zor and other areas under their control to stop ISIS attacks. But so far, instability has continued in the area.