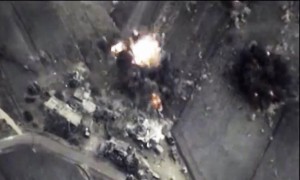 A wave of airstrikes by Russian warplanes in Syria has been accompanied by a ground assault by “regime forces”, says a monitoring group.

At least four rebel positions have been hit by the attacks, the Syrian Observatory for Human Rights said.

“Regime forces” is a term the Observatory uses broadly to describe the mix of Syrian military and allied local and foreign militia.

According to the Reuters news agency, Syria’s military plan involving Russia to take on the rebels was formed in July after a visit  to Moscow by an Iranian general.

Major General Qassem Soleimani’s visit started the process that led to a Russian military intervention that has reshaped the Syrian war.

It has led to Russian warplanes bombing rebels from above and Iranian special forces taking part in ground operations.

Reuters say that the general unfurled a map on the table at a top level meeting and explained to his Russian hosts how a series of defeats for President Bashar al Assad could be turned into victory – with Russia’s help.

Sources have told the news agency he has now been seen supervising ground operations against insurgents in Syria and planning the new Russian- and Iranian-backed offensive.