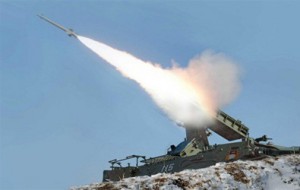 Islamic State militants have fired medium-range missiles for the first time killing four people, according to activists in Syria.

The target is home to a training camp of rebel group Raqqa Revolutionaries Brigades, which has been fighting ISIS.

According to Raqqa is Being Slaughtered Silently – a campaign run by anti-government and anti-ISIS activists – the first missile hit an empty village 25 miles south of Tel Abyad.

The fourth missile landed 700 metres south of the target, where a group of farmers were tending to their land.

It is reportedly the first time ISIS has used medium range missiles.

Nearby in the terror group’s capital of Raqqa, the world’s most wanted man, Jihadi John, is believed to have been killed in a U.S. drone strike.

Pentagon officials say they are ’99 per cent’ sure they have assassinated British Islamic State executioner Mohammed Emwazi.

The 27-year-old from London, who appeared in a string of sickening beheading videos of Western hostages including two British aid workers, was ‘evaporated’ by a missile as he climbed into a car.

Anti-ISIS activists say Emwazi is believed to have been hit near a symbolic clock tower in the city centre where the group has staged a number of horrific public executions, including crucifixions, since capturing the city two years ago.