Islamic State militants have killed 300 people in an “appalling massacre” in eastern Syria. 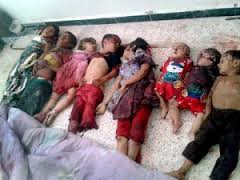 Most of those killed in day-long attacks on Deir el-Zour were elderly people, women and children.

The killings are some of the worst carried out by the extremist group, which controls large parts of Syria and Iraq.

Opposition activists also confirmed the killings. The Britain-based Syrian Observatory for Human Rights, which documents all sides of the Syria conflict through activists on the ground, said at least 135 people were killed.

It said around 80 of them were soldiers and pro-government militiamen, while the rest were civilians.

The group added that many of the victims were shot dead or beheaded.