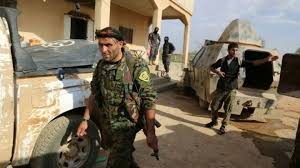 At least five US-backed forces were killed by an improvised explosive device in the eastern province of Raqqa, activists said to syrianobserver.com.

The Islamic State (ISIS) claimed the responsibility for attack that rocked a bus carrying members in the Syrian Democratic Forces (SDF) in the western countryside of Raqqa.

At least 30 SDF fighters were killed in ISIS attacks on their checkpoints in two weeks. The SDF has also killed at least 40 ISIS militants.

The surprise attack began with a car bomb near the town of al-Hajeen. Three fighters from the SDF were held captive, according to Deir ez-Zor-based media activist, Taj al-Allow.

Since Tuesday, clashes have intensified between the SDF and ISIS as the YPG-led fighters press to uproot the militants from their last pockets near the Iraqi border.

They are fighting near the strategic Bagouz area, a key ISIS stronghold on the eastern bank of Euphrates River.

The SDF seized control of the villages of al-Shajlah and Mouzan near the embattled village of Bagouz.

On Wednesday, two US Army soldiers were killed along with SDF forces in a car bomb attack in the town of Granij.

Three civilians were also killed in an ISIS rocket attack on the SDF-held town of al-Ja’abi.

The Kurdish-led forces have been among the most effective in the fight against ISIS in Syria, forcing them out of much of the country’s east.

Despite losing most of the territory it held between Iraq and Syria since its peak in 2014, ISIS remains a disruptive force in both countries.