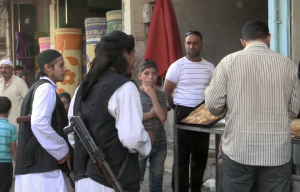 The Hisbah (ISIS’ religious police) has reappeared on the ground in Deir-ez-Zor, unleashing chaos in many villages and towns of the areas controlled by the Syrian Democratic Forces (SDF) in northeastern Syria, like reported by syrianobserver.com.

The organization’s members affiliated with the “Hisbah Apparatus” demanded all residents of the eastern Deir-ez-Zor countryside not to deal with the SDF and the international coalition, and to resign from the local councils and civil bodies affiliated with the Autonomous Administration, threatening to kill anyone who violates these instructions.

Local sources reported that, a week ago, members of the “Hisbah apparatus” stopped a van carrying several women harvesting wheat and barley in agricultural lands located in the countryside of Deir-ez-Zor, which is under the control of the SDF.

The sources added that the group stopped the van near the city of Al-Busira in the eastern countryside of Deir-ez-Zor, and demanded that women must wear full Islamic dress.”

They added that the “Al-Hisbah” asked all owners of vans not to transport any woman who is not wearing “full Sharia” dress, threatening to burn their cars and to impose a large fine on them if they don’t abide.

At the same time, members of ISIS’ Hisbah called, through local intermediaries, on all merchants, shop owners, and farmers to pay the “zakat” (Islamic tax) to the organization as soon as possible, to avoid “severe” penalties that will affect those who do not pay.

ISIS members are trying to collect money from the people of the Deir-ez-Zor countryside under the name of zakat, to finance its military operations against the “SDF” and pay the salaries of its fighters, and also to compensate for the large financial losses that it incurred previously, after its defeat.