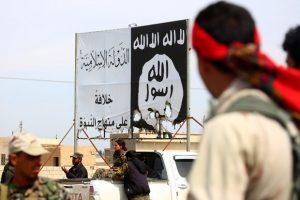 Islamic State group (IS) militants holding a small district in Damascus have gained some ground after driving out Syrian army units that moved into a neighbouring area that rebels abandoned last week, a war monitor said, like reported by middleeasteye.net.

In fighting that lasted 24 hours, the militant group killed 36 Syrian soldiers, the British-based Syrian Observatory for Human Rights said. The Syrian army could not immediately be reached for comment.

The district of al-Qadam lies in the Syrian capital’s southern suburbs and has not been part of the month-long offensive waged by the army against rebels in eastern Ghouta.

It is located next to the Yarmouk Palestinian refugee camp, a scene of fierce fighting early in the seven-year conflict.

Last week, rebels that had held part of Qadam for years quit the district for opposition areas in northern Syria under an evacuation deal with the government, allowing the army to move in.

However, IS, which had held a separate part of Qadam and had sporadically fought the rebels there, launched an assault to take the area they had vacated.

IS has lost almost all its territory in Syria after two rival offensives last year by the Syrian army, backed by Russia and Iran, and an alliance of Kurdish and Arab militias backed by the United States.

It now controls only the small pocket in Qadam, a patch of territory in southwest Syria near the borders with Jordan and Israel, and two small areas of desert on each side of the Euphrates near the border with Iraq.

News of the offensive comes as India’s foreign minister said Tuesday that the bodies of 39 Indian construction workers kidnapped in Iraq in 2014 by IS have now been found in a mass grave.

Sushma Swaraj told the upper house of parliament the workers had been murdered by IS.

Their bodies had been found in the grave in the village of Badush northwest of the city of Mosul and taken to a local organisation for DNA testing.

“Yesterday they told us that 38 samples had matched. The 39th had a partial match as he didn’t have any immediate family,” said Swaraj.

The 39 were abducted in June 2014 when IS militants overran large swathes of territory in Iraq and captured Mosul.

The victims were mostly from poor families in India’s northern state of Punjab and had been working for a construction company in Mosul when they were rounded up.

“We got to know that these people were moved from Mosul to Badush by their captors,” Swaraj said.

The minister said that when India’s junior foreign minister Vijay Kumar Singh and Iraqi government officials went to Badush, someone told them to inspect a mound in the village.

“They said that they had buried many people there (in a mass grave). We reached there and requested Iraqi authorities to use a deep penetration radar, which detected many bodies under the surface,” she told parliament.

When the area was excavated, Indian officials found many identification marks such as non-Iraqi shoes and Sikh religious bangles.

“We felt these were our people… contacted a foundation working on the issue and shared missing workers’ families’ DNA samples with them for the identification process,” the foreign minister told parliament.

The Indian government had never received any ransom demand or any other direct communication from the kidnappers.

India will send a special plane to bring the bodies home, said Swaraj.

“Howsoever painful, the families will get the dead bodies after over three years. This will hopefully bring some closure to the grieving families,” she said.

In February, Islamic state militants ambushed a convoy of pro-government fighters near the northern Iraqi city of Kirkuk late on Sunday, killing at least 27 of them.

Earlier that month two policeman were also killed in an attack on an Iraqi oilfield. Iraq declared victory in its fight to oust the group from the country in December 2017.