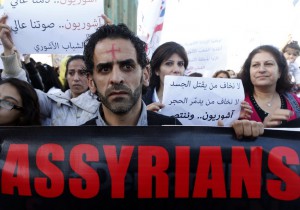 Members of the Islamic State (ISIS) holding hundreds of Christian hostages in Syria are asking for a $30 million ransom for their release, according to a report by NM.com.

A Fox News story cites a source in the Assyrian leadership, who says the terror group is demanding $100,000 for each of the estimated 250-300 hostages. The Christians were taken from their homes in a February attack.

Sunni Muslims in Syria are helping work out a deal with ISIS.

“They know we cannot come up with this kind of money, so they are hoping other groups and countries will come up with the money,” the source told Fox News.

The hostages were taken from nearly three dozen Assyrian villages in Syria’s northern province of al Hasakah. Twenty-three have already been released, although it’s not known why. Fox reports that those freed were ordered by their ISIS captors to leave Syria.

ISIS has been destroying Christian churches and artifacts in Iraq and Syria for months. The group used explosives to destroy a cathedral in Syria on Easter Sunday.

ISIS has also been slaughtering Christians as it strives toward its goal of creating a Muslim majority. The group has ordered Christians to either convert to Islam or be killed — including four Iraqi children, who were beheaded in December after refusing to convert.

On Wednesday, ISIS released more than 200 Iraqi Christians after holding them hostage for eight months. There was no reason given for the release, but many of the hostages were in poor health after being abused and neglected by their captors.

Meanwhile, a Christian militia is fighting ISIS militants and has been boosted by U.S. Army veterans, who have joined what they say is a fight for “faith.”

ISIS has been reportedly training children as young as 5 years old to serve in their ranks, training that includes how to handle an AK-47 and how to behead people.