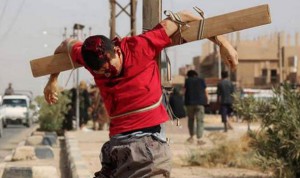 Islamic State militants crucified a teenage boy and left the body on display in Raqqa in one of the terror organization’s latest public executions.

The 17-year-old was accused of accepting money for filming Islamic State training sites and a placard in Arabic was hung around his neck telling people of his alleged crime.

While the Islamic State has repeatedly used crucifixion as punishment for those who have worked against them or violated Sharia law.

At the same time, people under Islamic State rule have tried to document the group’s violent methods in Raqqa.

The group crucified nine men in Aleppo last June, and routinely kill even fellow jihadists, if the group’s leaders think certain people are not devoted enough.