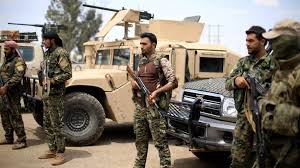 The SDF’s Coordination and Military Operations Center on Sunday said on Twitter that SDF special forces units had in a raid arrested nine Islamic State suspects, including senior leaders (emirs) in the Deir al-Zor countryside.

The cell was suspected of carrying out assassinations, planting improvised explosive device (IEDs) and smuggling weapons.

Although the SDF and the US-led Coalition announced the territorial defeat of the Islamic State in Syria in March 2019, sleeper cell attacks persist—especially in liberated territories—in an apparent campaign to destabilize the area.

US-backed fighters recently stepped up operations against the Islamic State in response to several assassinations, which the terrorist organization is thought to have conducted.

“ISIS is able to move freely back and forth over the Iraqi border,” he said. The group “still has sympathizers in these areas and ISIS ideology is still very much rooted in society.”

He added that ongoing rifts in Deir al-Zor between the SDF and Arab tribes over control give the terrorist organization the ability to exploit grievances of the local population.

The Islamic State has also been able to organize more insurgency-style attacks in Syria, he said, carrying out ambushes, demanding levies on rural businesses. Militants reportedly three civilians over the past month, including one woman, accusing them of being magicians.

Speaking to Kurdistan 24 on Sunday, Charles Flynn, a Syria-based researcher at the Rojava Information Center (RIC), described the situation as “a war of attrition.”

“We can see that in the general trend of things, the number of attacks have gone down,” he said, and noted that there have been “more high-profile arrests” in the recent days.

Still, the Islamic State is “holding on, focusing on assassinations of public figures and civilians.”

Flynn also explained that over the past two years ago, there were more attacks on SDF checkpoints.

According to an RIC report published early March, the Islamic State claimed responsibility for 22 out of 28 attacks in February in predominantly Arab southern regions in northeast Syria. During the attacks, at least 30 persons were killed.

The group largely targets those who work with the SDF, local administrations, and tribal leaders. Civilians who refuse to pay taxes are also targeted.

“This month, through various ISIS publications and communications, ISIS declared that bakers were fair game for assassination if they failed to make contributions,” the report said.

A Pentagon Inspector General (IG) report covering the last quarter of 2020 (October 1, 2020 – December 31, 2020) said that “ISIS carried out nearly half of its attacks in Syria this quarter in [Deir al-Zor] province, followed by more than 15 percent in Homs province and 14 percent in Hamah province.”

Flynn told Kurdistan 24 that Deir al-Zor has long been repressed and unrepresented in Syria and was one of the original areas where the Islamic State was born.

He also said the area has suffered a great deal due to the conflict in the past and that the SDF has tried to assure them of a new future.

“Of course there is going to be lingering resentment and anger in the populace there, which with a network of sleeper cells, can be used as powerful recruitment tools, giving everyday people an outlet for their trauma and tragedy suffered in the war,” he concluded.