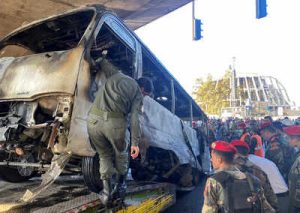 At least 14 people have been killed and several injured in a bomb blast that targeted a military bus driving through the Syrian capital on Wednesday morning.

The attack – the deadliest in Damascus for years – is believed to have been carried out by the Islamic State terror group but nobody has yet officially claimed responsibility. It follows a recent spate of attacks on government troops fighting to maintain control after President Bashar al-Assad’s forces retook the vast majority of the areas from various terror groups.

Syrian state TV showed footage of the charred bus and images showed smoke from the soldiers hosing down the destroyed vehicle. An investigation into how the attack happened and who is responsible is ongoing.