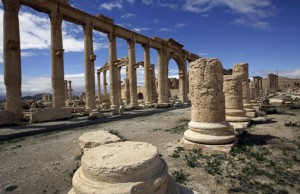 The Syrian Observatory for Human Rights, an activist group, also reported fierce clashes between jihadis and government troops on the outskirts of the city’s 2,000-year-old UNESCO world heritage site.

“At least five civilians, including two children, were killed Sunday night when ISIS fired rockets on numerous neighbourhoods in Tadmur,” the Observatory said, using the Arabic name for the city.

“It’s the first time that IS has fired so many rockets on the city,” said Observatory chief Rami Abdel Rahman, who gathers information from a network of civilians, medics and fighters in Syria.

According to Syrian antiquities director Mamoun Abdulkarim, two rockets fell Sunday on the garden of Palmyra’s museum, which houses statues, sarcophagi, and other well-preserved artefacts, without causing any damage.

ISIS has surrounded the city after launching a fierce assault on May 13, briefly overrunning parts of the north and east.

Since Saturday, the jihadis have been firmly entrenched one kilometre (less than a mile) from Palmyra’s archeological treasures, including colonnaded alleys and elaborate tombs, which lie southwest of the city.

On Saturday, ISIS seized control of northern Palmyra before being pushed back by pro-government forces less than 24 hours later.

Located in central Homs province, Palmyra lies 210 kilometres (130 miles) northeast of Damascus in desert that stretches to the Iraqi frontier to the east.