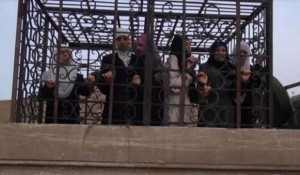 A new photo series released by an unknown group of Syrian rebels shows Alawite Muslim women locked in cages on top of roofs to help deter airstrikes by Russians.

Rebel groups other than ISIS in the region the Free Syrian Army, the al-Nusra Front, al-Qaeda, and many others. All are fighting the Bashar al-Assad regime, which is currently being propped up by Russia and spearheaded by Putin. Assad himself is Alawite.

The UK-based Syrian Observatory for Human Rights said the people were military officers and their families who had been captured by rebels in the area. The rebels also want to make a statement that  whatever happens to Syrian civilians will also happen to Assad’s supporters.

Images of caged people transported on the back of pick-up trucks emerged on the Shaam News Network. They were said to be travelling in the area of Eastern Ghouta, northeast of the Damascus.

Alawites are a Muslim minority group that makes up about 12% of the Syrian population. According to About Middle East: “Alawites practice a unique but little known form of Islam that dates back to the 9th and 10th century.