You are here: Home / MidEastGulf / Syria: ISIS isolates Deir Ezzor from its Airport 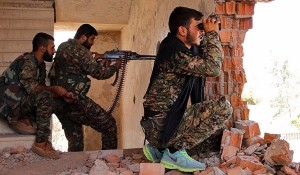 During its third day of continuous attack, ISIS isolated the city of Deir Ezzor from its military airport as part of the organization’s efforts to kick out the regime from its last stronghold east Syria, like reported by aawsat.com.

The Syrian Observatory for Human Rights said ISIS achieved on Monday an important advancement after controlling the Jeriah residential project in addition to cutting off the access route linking the city to the airport.

The Observatory added that ISIS also separated the city’s eastern half from its western half, which is now divided by an area where ISIS advanced last Sunday by controlling the hill facing Deir Ezzor.

During the last 24 hours, the Observatory said 84 people were killed including 14 civilians.

Media activist in Deir Ezzor Ahmad Ramadan told Asharq Al-Awsat that ISIS was capable of isolating the airport from the city by controlling the regime’s access route to the airport.

“Because ISIS now controls the airport and the nearby Arayeh area, it will be easier for the organization to control the rest of the regime-held neighborhoods. Therefore, the entire Deir Ezzor would end up in the hands of ISIS,” Ramadan said. He added that Russian and Syrian warplanes launched more than 60 airstrikes on several battlefield positions but failed to make any changes.

However, ISIS retreated in the Raqqa countryside where Kurdish forces, backed by the Washington-led international coalition, were capable to control a number of villages.

Meanwhile, seven opposition factions presented on Monday the names of their representatives who would attend the Astana talks. The majority of Aleppo’s opposition factions also announced their participation in the talks, expected on January 23 in the Kazakh capital.

Turkey and Russia are working to organize the new series of Syrian peace talks between the Bashar Assad regime and the opposition.

However, most factions operating in Idlib still refuse to attend the talks, despite the efforts exerted by Ankara and Russia in this regard.

Sources close to the Astana talks told Asharq Al-Awsat on Monday: “Moscow and Ankara say they chose to limit the opposition’s representation by only inviting the factions and not the political groups – because the Astana talks would discuss military affairs related to the ceasefire.”

The sources said the Syrian regime delegation will include generals and military expert teams even if Assad insists that the delegation be headed by Bashar al-Jaafari, the permanent representative of Syria to the U.N.