You are here: Home / MidEastGulf / Syria is vital for Iran, despite heavy losses 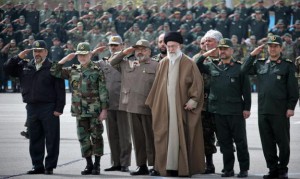 Iran’s Revolutionary Guards chief Mohammad Ali Jafari made it crystal clear in remarks made on November 17th that Damascus would have fallen long ago were it not for Iran’s meddling in Syria. This also sheds light on the vital importance of Syria, described by senior Iranian officials as its 35th province, for the ayatollahs in Tehran. And they are willing to pay heavy prices to maintain their control over the country, yet the tide is turning heavily.

At a ceremony held on the 40th day after the death of a Revolutionary Guards general Hossein Hamedani, Iran’s most senior military figure in Syria, Jafari said, “Without a doubt one can say Damascus would have fallen two or three years ago if Hamedani was not present in Syria.”

The truth is, however, Iran is paying a heavy price on the ground to maintain Bashar Assad in power in Syria.

“Certainly… if matters are not materialized for the population in Syria, it will have a direct impact on our security, and everyone understands how this issue is deeply associated to us,” he said on the impact of Iran’s military personnel being killed in Syria.

Local media in the region provide a very clear picture of how Iran is suffering on a daily basis in the Levant.

Qassem Suleimani was injured a few days ago during a counterattack south of Aleppo, a security source in the Assad regime confirmed.

Rami Abdul Rahman, director of Syrian Human Rights Observatory said in an interview with Agence France Presse that Suleimani was injured near the town of Al-Ayes, south of Aleppo.

A Revolutionary Guards (IRGC) brigadier general by the name of Abdulreza Majiri has been killed in clashes near the city of Aleppo, Al Jazeera TV reported on November 28th citing Iranian news agencies.

Ever since the number of IRGC members in Syria began to increase significantly, coupled with Russia’s military intervention, the number of Iranian military personnel killed in Syria has reached 63.

Opposition Fatah Army fighters have posted video footages of arresting an Afghan foot-soldier hired by Iran and fighting in clashes south of Aleppo.

The corpses of seven IRGC members killed in Syria have been returned to Iran, state-run media reported on Friday. These corpses were transferred to Zahedan airport. State-run media did not mention the military ranks of these dead IRGC members or where they were killed.

The village of Tal Bajer in southern Aleppo has been taken over by opposition fighters, and 40 Assad regime forces and his militant members have been killed, armed Syrian opposition groups announced. The fighters have posted video clips of their artillery fire on the village of Tal Bajer, saying a number of Iran-associated militants have also been killed. The fighters also took over the strategic Zahi tower located near Latakia. In response Russian warplanes carried out airstrikes in southern Aleppo, Latakia and Idlib. During the early morning hours of Saturday, November 28ththe town of Saramde near the Syria-Turkey border suffered from Russian airstrikes.

Yet another Lebanese Hezbollah member by the name of Ahmed Yousef Al-Mirallah from the village of Kafar Malaki in southern Lebanon has been killed in Syria, state-run IBNA news agency reported. There is no information about the time and how this Hezbollah member was killed. However, he was buried in his home village on Wednesday, November 25th.

The Fatah Army in Syria announced its fighters were able to take over a number of towns south of Aleppo, Al Jazeera reported on November 25th. These victories were realized after heavy clashes against Iran’s IRGC and their Iraqi militia proxies. An Iraqi militia commander was killed in the clashes south of Aleppo. The fighters were also able to destroy a number of vehicles belonging to the militia forces.

Further reports on November 17th indicated another IRGC member by the name of Sattar Abbasi from the city of Kermanshah, western Iran, was killed in Syria.

It is worth noting that Assad’s mercenaries and military personnel of a unit dubbed the National Defense force also took part in these clashes. A number of these fighters were seen amongst the killed fighters.

This is just the tip of the iceberg on how Iran is suffering drastic setbacks in Syria, yet is forced to continue this trend, invest further billions on Assad, send more crude oil to Damascus, provide further military equipment and …

The tide is turning, however, and it is only a matter of time when the ayatollahs will realize that continuing their support of Assad in Syria is not worth the price. The paradox in all this is that Iran has to continue placing it’s all for Assad, realizing very well that the ultimate loss of Syria will be the beginning of the end of its own very establishment back home.