You are here: Home / MidEastGulf / Syria, Iran vow to step up fight against ‘terrorists’ 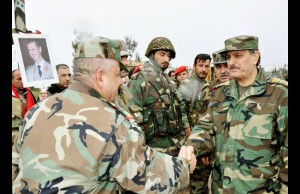 Syria and Iran have agreed to “intensify efforts to fight terrorism,” Syria’s defense minister said in Tehran, after a series of government defeats at the hands of rebel forces.

Defense Minister General Fahd al-Freij, quoted by state news agency SANA, said key allies Damascus and Tehran were on the same page on how to tackle the fight against anti-government rebels.

“We agreed on the next measures to be taken together to confront terrorism,” SANA quoted Freij as saying while on a two-day trip to Iran this week.

“It is important to intensify efforts to fight terrorism, particularly after the escalation of recent months,” he added.

In the last month, Syrian government forces have suffered a series of setbacks, particularly in northwestern Idlib province.

A coalition of rebels including Al-Qaeda’s Syrian affiliate Al-Nusra Front now controls much of the province after seizing its capital, the key town of Jisr al-Shughur and a military base in the last few weeks.

“Syria’s enemies will spare no effort to continue their plot,” Freij said, in a reference to the rebels and their regional and international backers.

Syria’s regime and allies refer to all those seeking to oust President Bashar Assad as “terrorists” and accuse opposition supporters like Turkey, Qatar and the United States of funding extremism.

“We will resist the [extremist] takfiri-Zionist groups with all our strength,” he added, describing jihadi groups as being in league with Israel.

Iran has played a key role in bolstering Assad’s regime against an uprising that began with anti-government protests in March 2011 before spiralling into a war after a crackdown by authorities.

It has provided financial aid and military support, largely in the form of military advisors.

But Assad, in an interview with French television this month, denied that Iranian troops were fighting on the ground.