You are here: Home / Mediterranean / Syria indefinitely extends Russia’s use of air and naval bases 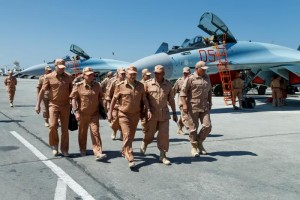 Russia and Syria have signed agreements to indefinitely prolong Russia’s use of a naval base and an airbase on Syrian territory, according to copies of the contracts published Friday, according to eblnews.com.

Russia, the main military backer of the Syrian government in that country’s bloody civil war, has been using the naval facility in the coastal Tartus province since the Soviet era. It is Russia’s only naval base on the Mediterranean Sea.

Russia has been using the Khmeimim airbase, in another Syrian coastal region, Latakia, about 100 kilometres north of Tartus, as the main base for its bombing campaign against militant groups in the country for more than a year.

The deals permit Russia to use the facilities for the next 49 years, with automatic extensions thereafter every 25 years unless cancelled by either side with a year’s advanced warning, according to the texts posted on the Russian government’s legal information website.