You are here: Home / MidEastGulf / Syria: Hayyat Tahrir Al-Sham attacks Kefraya and Foua in the most violent clashes for 3 years 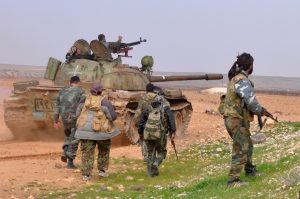 Heavy clashes broke out after an attack by fighters from Hayyat Tahrir al-Sham in the towns of Kefraya and Foua in Idleb countryside, like reported by syrianobserver.com.

For about three years, the two towns in the northern Idleb countryside, which are majority pro-regime, have been under a heavy siege imposed by Hayyat Tahrir al-Sham. The two towns are controlled by fighters from pro-regime Shia popular councils.

According to the Syrian Observatory for Human Rights, the Hayyat fighters, “late on Saturday began a heavy bombardment on the two towns before storming them and clashing with local gunmen.”

Heavy clashes have continued until today, which has led to the death of six loyalist fighters and three from Hayyat.

Short skirmishes between the two sides are sometimes recorded, but the frontline has seen relative calm in recent months.

This is “the heaviest attack on the two towns in about three years.”

The regime news agency SANA reported that “heavy clashes” were occurring with fighters from Hayyat who had slipped into the two towns, and claimed that the popular councils had “forestalled” the attack.

Regime forces today carried out raids in the area around the two towns, and targeted a number of other towns including Binish and Ram Hamdan, in addition to points where Hayyat Tahrir al-Sham has been concentrated at the front lines.

Foua and Kefraya are the only two towns currently under siege in Syria according to the United Nations. It was expected that 5,000 of its residents would be evacuated last week in exchange for removing Hayyat Tahrir al-Sham fighters from southern Syria, according to regime media, however the evacuation was limited to medical cases from the two towns.