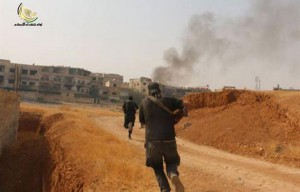 Syrian forces have been preparing to storm a strategic suburb south of the capital Damascus, according to both pro and anti-regime sources.

Local anti-regime outlet Enab Baladi reported Tuesday morning that government forces launched a new military operation on the outskirts of Darayya in a bid to storm the rebel-held town that has been besieged by the regime since November 2012.

“Fierce clashes have raged on the town’s southern and western fronts from early morning and until the moment this report was made,” Enab Baladi’s correspondent in the town said.

The correspondent said that the Syrian army and allied militias were aiming “to storm [Darayya] after several days of continuous preparatory fire.”

The largest rebel group based in Darayya on Tuesday morning announced on Twitter that armed opposition groups in the town were coming under heavy attack by regime forces.

“The FSA are fighting fiercely in the town of Darayya on several fronts in reaction to attempts to advance by regime forces,” the FSA-affiliated Martyrs of Islam Brigade said.

The group claimed it had been inflicting heavy losses on regime forces, but warned that “Assad’s forces and his aides are continuing in their bid to control one of [the area’s] positions, using all available means.”

“They will try to storm us again and they will leave corpses, tanks and disappointment behind them,” it boasted.

“The Syrian army has begun storming the town of Darayya in rural Damascus from several fronts,” the Hadar al-Hadath Facebook page said.

The military moves outside Darayya coincided with heavy regime bombardment of the town.

“The number of barrel bombs dropped by regime helicopters on areas of the town of Daraya in western Ghouta has risen to at least 52,” the Syrian Observatory for Human Rights reported Tuesday.

The SOHR also reported that a civilian from Daraya had died as a result of wounds sustained during a previous barrel bomb attack on the town.

Meanwhile, Enab Baladi said that heavy fire with various types of munition had caused civilian casualties in the town.

“At least five civilians were killed and dozens were injured after civilian areas were [targeted] with surface-to-surface missiles, heavy artillery and barrel bombs.”

Darayya—which lies eight kilometers to the southwest of the capital and is mostly controlled by the opposition—has been besieged by the regime for the past two three years, after it failed to oust rebels from the Damascus suburb in fierce fighting spanning from November 2012 to March 2013.

The town is strategically important, lying near the Mezzeh Airbase less than three kilometers to the north as well as near the Republican Palace, the Republican Guard’s headquarters and the Syrian Army’s crack Fourth Armored Division.

In mid-June, reports emerged that the regime was razing hundreds of homes in the strategic area southwest of Damascus to fortify the capital against a potential attack by armed opposition factions.

The Syrian regime demolished on Monday and Tuesday 500 houses next to the Mezze Airbase in parts of Darayya controlled by the government, Turkey’s Anadolu news agency reported on June 16.