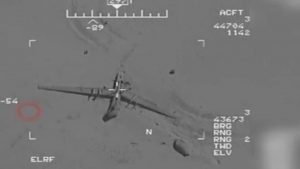 The attack occurred near the Syrian city of Albukamal shortly after the combatants crossed the border in a vehicle. There were unconfirmed reports of casualties, according to the news agency Alarabia.

The center said that explosions were heard in Syria’s Deir Ezzor province, where many pro-Iran militias and Islamic Revolutionary Guard Corps forces are stationed.

Two weeks ago the Syrian news agency SANA reported that Israeli fighter jets launched missiles at targets in the Damascus area, though most of the missiles were intercepted.

The Israel Defense Forces have declined to confirm an attack, but a spokesman did say that a missile launched from Syria into Israeli territory had exploded over the sea.

Shrapnel from the missile was found at several locations on the Tel Aviv beach and were retrieved by the army and police.