At least 45 people were reportedly killed in a village close to al-Bab, which was seized back from Islamic State 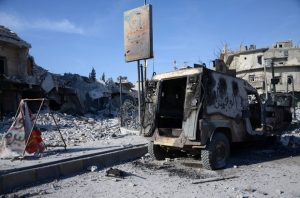 The Turkey-backed rebels on Thursday drove Islamic State from al-Bab, the group’s last significant stronghold in northwest Syria, along with two smaller neighbouring towns of Qabasin and al-Bezah, after weeks of street fighting.

The car bomb on Friday morning struck military and security offices in Sousian, which is behind the rebel lines about eight kilometres northwest of al-Bab, the Syrian Observatory for Human Rights, a Britain-based war monitor, said.

On Thursday, several Turkey-backed rebels were killed by a mine in al-Bab while clearing the town of unexploded ordnance after Islamic State retreated, the Observatory said.

However, both those sides, as well as a group of militias led by Kurdish forces and supported by the US, are also fighting Islamic State, which holds large swathes of northern and eastern Syria.

Turkey directly intervened in Syria in August in support of a group of rebel factions fighting under the Free Syrian Army banner to drive Islamic State from its border. It also wants to stop Kurdish groups from gaining control of most of the frontier.

After taking al-Bab on Thursday, Turkish forces shelled Islamic State in the smaller neighbouring town of Tadef, the Observatory reported. The area immediately to the south of Tadef is held by the Syrian army and its allies.