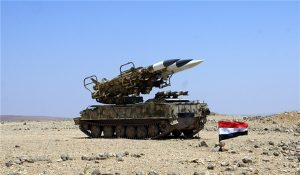 A Syrian government forces commander made the announcement on Monday, noting that “they cover the air space of the Syrian north,” press tv reported.

The Northwestern province of Idlib, which borders Turkey and is largely under the control of Al-Nusra Front (Tahrir al-Sham Hay’at or the Levant Liberation Board), is one of the last main strongholds of jihadi militants opposed to Syrian President Bashar al-Assad, who have been driven from most of their bastions across Syria in recent years.

The commander further said that the defense systems were deployed on the frontlines in rural regions of the provinces, adding that they had been deployed as “a message to everyone.”

The deployment comes at a time that Turkey has been launching airstrikes against the Northwestern Syrian Kurdish region of Afrin, which is part of the Aleppo province.

Turkey launched the so-called Operation Olive Branch in Syria’s Afrin on January 20 in a bid to eliminate the YPG, which Ankara views as a terror organization and the Syrian branch of the outlawed Kurdistan Workers’ Party (PKK).

Before Turkey launched operation Olive Branch, the government in Damascus had warned that it would shoot down any Turkish warplane that enters Syrian airspace.