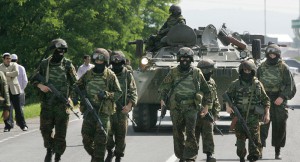 A Syrian emissary from the Daesh jihadist group was among six fighters killed in the Russian Republic of Ingushetia, the Russian Anti-Terrorist Committee said Friday.

The committee confirmed earlier reports of six militants killed in the anti-terrorist campaign in the North Caucasus region without civilian or law enforcement casualties.

“Special forces neutralized four militants in the city of Nazran and two more in Gazi-Yurt. According to preliminary information, Daesh emissary Zabayri Sautiyev who arrived from Syria to resume terrorist activities in the country is among the neutralized bandits,” it said in a statement. A cache of weapons, ammunition and explosives, including two suicide vests, have been uncovered at the site of the clashes, it added.