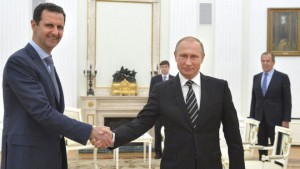 Russia says it is not crucial for Syria’s President Bashar al-Assad to stay in power, saying it is up to the Syrian people to decide, the Russian foreign ministry has said.

When asked if saving the Syrian leader was a matter of principle for Russia, spokeswoman Maria Zakharova said: “Absolutely not, we never said that.”

“We are not saying that Assad should leave or stay,” she added.

Russia is supporting the Syrian government with air strikes on rebels.

Ms Zakharova said on the Ekho Moskvy radio station that whether Mr Assad stayed or stepped down was not critical for Russia, but that it was up to the Syrian people to decide his fate.

Russia is seen as one of Mr Assad’s strongest backers.

In September, Russia started carrying out air strikes against rebels in Syria, after Damascus suffered a string of defeats to both rebel forces and the Islamic State (IS) group.

The US has said Mr Assad can have no part in Syria’s political future.

Earlier on Tuesday, Russian Deputy Foreign Minister Mikhail Bogdanov said that Moscow was aiming to host a round of talks between Syrian government officials and members of the country’s opposition in Moscow next week.

Why is there a war in Syria?

Anti-government protests developed into a civil war that, four years on, has ground to a stalemate, with the Assad government, Islamic State, an array of Syrian rebels and Kurdish fighters all holding territory.

Who is fighting whom?

Government forces concentrated in Damascus and the centre and west of Syria are fighting the jihadists of Islamic State and al-Nusra Front, as well as less numerous so-called “moderate” rebel groups, who are strongest in the north and east. These groups are also battling each other.

More than 250,000 Syrians have been killed and a million injured. Some 11 million others have been forced from their homes, of whom four million have fled abroad – including growing numbers who are making the dangerous journey to Europe.

How has the world reacted?

Iran, Russia and Lebanon’s Hezbollah movement are propping up the Alawite-led Assad government, while Turkey, Saudi Arabia and Qatar back the more moderate Sunni-dominated opposition, along with the US, UK and France. Hezbollah and Iran are believed to have troops and officers on the ground, while a Western-led coalition and Russia are carrying out air strikes.