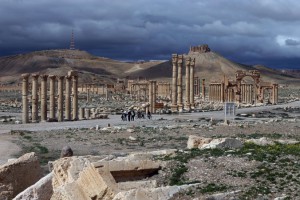 Islamic State militants have been pushed back from the ancient Syrian site of Palmyra, officials and a monitoring group say.

Militants seized part of the town of Tadmur on Saturday, which is located on a strategic east-west route next to Palmyra’s World Heritage-listed ruins.

Nearly 300 have reportedly died in four days of fighting.

Meanwhile, the number of militants reported killed in a rare US ground raid in Syria on Saturday rose to 32.

The Syrian Observatory for Human Rights, a UK-based monitoring group, said that among those killed were “IS oil chief Abu Sayyaf, the deputy IS defence minister, and an IS communications official”.

US officials had said about 12 militants were killed at the scene of the raid in the eastern province of Deir al-Zour.

They said Abu Sayyaf had been killed in a firefight during the special forces raid, and his wife was captured.

The Syrian Observatory said at least 295 people had been killed since IS began advancing on Palmyra on Wednesday. It said they were mainly militants and government troops, though it said 57 civilians were also killed, including dozens executed by IS.

Militants had pulled out of the northern parts of Tadmur, but still held a village north of Palmyra, the group said.

The Unesco World Heritage site is located on the road that leads from the contested eastern city of Deir al-Zour to the city of Homs and the capital, Damascus. It is also close to gas fields and home to a major airbase.

Maamoun Abdulkarim, Syria’s head of antiquities, said the army was in control of the whole of Tadmur, including the outskirts, and that the ruins south-west of the town – already damaged in previous fighting – had not suffered further harm.

IS has ransacked and demolished several ancient sites that pre-date Islam in Iraq, leading to fears that it might attempt to damage or destroy the Palmyra ruins.

The militant group took control of control of swathes of territory in north-eastern Syria and northern Iraq last year.

In Iraq, the government has been trying to retake some of that territory by advancing in Anbar province, but has faced an IS offensive against the strategic city of Ramadi since Friday.

IS has now tightened its grip over large areas of the city while controlling more than half the surrounding province, the BBC’s Ahmed Maher reports from Baghdad.

Ramadi is just 70 miles (112) west of the capital and has direct supply lines to IS strongholds in neighbouring Syria. Our correspondent says the government is extremely worried.

A local official said more than 500 people had been killed in the last two days of fighting around Ramadi, including policemen who were trapped after running out of ammunition and civilians caught in the crossfire.

Some 8,000 people have been displaced over the same period, according to the International Organisation for Migration.