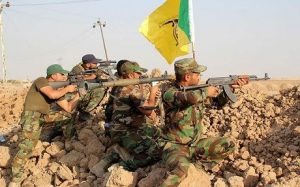 Several fighters followed to the Iraqi Hezbullah militias were reportedly killed and others injured on late Monday following an attack by ISIS that targeted military positions in the eastern countryside of Deir Ezzor, like reported by qasioun-news.com.

Media sources reporting from Deir Ezzor said that ISIS conducted an attack with a VBIED and targeted a gathering point for Iraqi Hezbullah militias, which led to casualties among their fighters and destroyed other military vehicles.

Hezbullah in Iraq is considered as a major armed group and close to Iran, it fought among the Popular mobilization forces militias against ISIS and accused for committing massacres against civilians, also it is fighting in Syria near the Syrian regime front-lines.