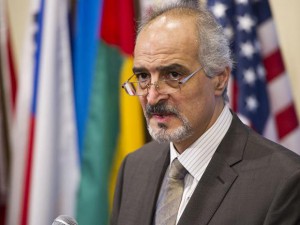 Syria”s permanent representative to the UN, Bashar al-Jaafari, called for the fight against terrorism as a priority in the Agenda for Sustainable Development Post-2015 is included.

Al-Jaafari said that the Syrian economy, infrastructure, natural resources and potential, are threatened by terrorism sparking a crisis in his country for more than four years ago.

Terrorism is burning everything around it and killing all the achievements of the Syrians to development, he added

He stressed that the ultimate goal of the terrorists and their sponsors, is to destroy the Syrian heritage and everything that represents this nation of Levante as important fortress of moderation, tolerance and peaceful coexistence in the region.

Syrian UN representative denounced the indiscriminate and illegal practices in the oil and gas by the armed extremist gangs and serious threat to the environment caused by these actions.

He also alerted the international community about what he called “unfortunate drain ‘of Syrian cultural heritage at the hands of the terrorist group Islamic State (EI) and other organizations Takfirists.

He also pointed out the serious consequences of unilateral economic sanctions against his country, which undermine development.

About the migratory avalanche that involves millions of Syrians, al-Jaafari said that is the result of a misguided some countries in addressing the development of disadvantaged nations approach.

He listed the lack of seriousness in financial support to these countries, participation and funding crisis and interference in the internal affairs of other States, as the main causes of this flow of immigrants.

The Syrian ambassador to the UN also denounced the continued occupation of Arab territories by the Israeli government for more than six decades, something considered as another important obstacle to the development of the Middle East.