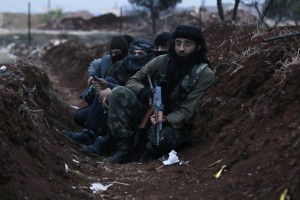 Al Qaeda-linked militants attacked a prison Wednesday where its fighters are held by other Syrian rebels in escalating violence in northern Syria after Russian-led talks urged mainstream insurgents to break with the extremists.

The infighting, some of the worst in recent years, is likely to weaken the rebellion but also could help isolate the extremist group, like reported by bostonglobe.com .

The fighting pits the Al Qaeda-linked Fatah al-Sham Front against several other groups, including its former ally, Ahrar al-Sham, one of the most powerful insurgent organizations in Syria’s nearly six-year-old civil war.

Some of the rebels involved in the fighting were represented at talks this week in Astana, Kazakhstan, which were brokered by Russia and Turkey and aimed at shoring up a shaky Dec. 30 cease-fire with President Bashar Assad’s forces. The talks brought the armed rebel factions face-to-face with Assad’s representatives for the first time.

The two-day talks ended Tuesday with an agreement among Russia, Turkey, and Iran to consolidate the cease-fire, take joint action against extremist groups, and jump-start peace negotiations.

Charles Lister, a senior fellow at the Washington-based Middle East Institute, said that if the Al Qaeda-linked group comes out on top in the fighting, the rebels would be more inclined to cooperate with calls for dissociating with its militants.

The Fatah al-Sham violence sought to protect its dominance in northern Syria, one of the remaining strongholds of the opposition, he added.

‘‘I think [Fatah al-Sham] found itself surrounded by potential threats and in an environment in which politics suddenly was trumping military activities,’’ Lister said.

Before the talks, Fatah al-Sham described them as a ‘‘conspiracy’’ to divide the Al Qaeda-linked group from the other rebels.

‘‘Ironically, we may now eventually see just that scenario play out in the future,’’ Lister said.

But the rebel groups, who had been reluctant to dissociate with Al Qaeda-linked militants in part because of their fighting ability and the lack of discipline in others, already are reeling under the offensive. One of the rebel groups in Astana, the Army of Mujahedeen, has lost a number of its ammunition depots to Fatah al-Sham.

Ahrar al-Sham already blamed Fatah al-Sham for starting the infighting, calling it ‘‘the greatest service’’ to those seeking to isolate the Al Qaeda-linked group. It said it had deployed its own fighters to bring the situation under control.

A Twitter account of the central prison issued a call for help, asking civilians to march to the facility. It posted video of prisoners inside urging Fatah al-Sham ‘‘to fear God’’ and stop the violence.

Fatah al-Sham accused the rebel groups of ‘‘unprovoked’’ attacks on its bases in Idlib that left six fighters killed. It blamed Suqour al-Sham and the Army of Islam — both represented in Astana.

The clashes began earlier this week between Ahrar al-Sham and a faction associated with Fatah al-Sham, and has escalated since then. The Britain-based Syrian Observatory for Human Rights said rebel groups had seized Fatah al-Sham checkpoints in four villages by late Tuesday.

Ahrar al-Sham, an ultraconservative group and one of the most powerful in northern Syria, refused to attend the Astana talks, in part because of attempts to isolate Fatah al-Sham, with which it was discussing a merger.

By going on the offensive, Fatah al-Sham is likely to turn its guns on other groups, something that will probably force Ahrar al-Sham ‘‘to declare war in defense of the opposition,’’ Lister said.

The Syrian government and its ally, Russia, have long referred to the entire armed opposition as ‘‘terrorists,’’ in part because they have fought alongside Fatah al-Sham. In a way, the Astana talks challenged that label when the government agreed to sit with at least 13 rebel factions.

Fatah al-Sham claimed to have severed ties to Al Qaeda when it changed its name from the Nusra Front last year, but it did not change its leadership or strategy and is still widely seen as an extension of the global terrorist network.

Fatah al-Sham was excluded from the current and previous cease-fires, along with the Islamic State group, but until now the other rebel factions have been reluctant to break with the Al Qaeda-linked group.