You are here: Home / MidEastGulf / Syria army pushes back rebels near regime heartland 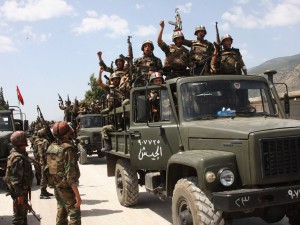 The Syrian Observatory for Human Rights said at least 20 regime forces and 19 rebels from the Army of Conquest alliance had been killed in 24 hours of clashes in Hama province’s Sahl al-Ghab region.

The area borders Latakia province, a bastion of support for Assad and home to his ancestral village.

Earlier this week, the rebel alliance, which includes Al-Qaeda affiliate Al-Nusra Front, began a major offensive in the area, taking around 17 strategic hilltops and other positions, including a power plant.

The Britain-based Observatory said Saturday that regime forces had retaken around seven of those positions, including the power plant.

Syria’s official SANA news agency said “dozens of terrorists” had been killed and that troops had captured several villages after “intensifying operations in the area.”

The rebel advance in Hama put a string of majority-Alawite villages at risk.

The Alawite sect, an offshoot of Shiite Islam, is the faith to which Assad adheres.

Elsewhere, the Observatory said 25 Syrian rebels, including three senior commanders, were killed in a failed attack on a makeshift army base outside the northern city of Aleppo.

SANA said “a number of terrorists were killed and wounded” by government forces in the west of the city.

The Observatory said sporadic fighting was continuing on the western outskirts of Aleppo on Saturday morning, with regime planes carrying out air strikes and rebels firing rockets on loyalist positions.

Once Syria’s economic powerhouse, Aleppo has been ravaged by fighting and divided between government control in the west and rebel control in the east since shortly after fighting began there in mid-2012.

In early July, two rebel alliances launched attacks against regime forces in the western outskirts of the city, sparking some of the heaviest violence since the country’s war arrived in the city in 2012.

The assaults were largely repelled, though rebels have continued sporadic attacks.

The jihadist group issued a similar directive in its de facto Syrian capital Raqa in July.

The ban there sought to prevent residents from accessing the internet privately, instead forcing them to go through monitored internet cafes.

The Observatory said the bans appeared to be motivated by a desire to create a news blackout but also to thwart foreign fighters who might be trying to return home without IS permission.