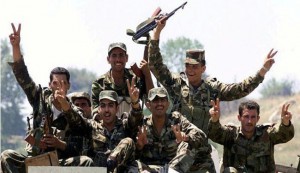 The Syrian Observatory for Human Rights said government troops were now some five kilometers (three miles) west of the city and engaged in fierce clashes with forces from the extremist group.

“Regime forces could enter the city at any moment, they are not far away and the area between them and the city is desert,” Observatory director Rami Abdel Rahman said.

The Britain-based monitor said the fighting was accompanied by intensive regime airstrikes on the city of Palmyra, which is famed for its ancient ruins, a UNESCO World Heritage site.

The group said civilians in Palmyra were fleeing the aerial bombardment, which has intensified in recent days.

There was no immediate toll in the fighting or the airstrikes, which have generally targeted the residential part of Palmyra, not its ancient sector.

In Damascus, a security source confirmed the army had advanced to within several kilometers of Palmyra.

“Yesterday, the army was able to make significant progress in advancing towards the city,” he said, speaking on condition of anonymity.

“Fighting is continuing between the army and Daesh,” he added, using the Arabic acronym for ISIS.

Official news agency SANA said air raids hit ISIS positions in Palmyra as well as on the outskirts of the Shaar gas field and other areas in Homs province.

ISIS forces overran Palmyra on May 21, after sweeping towards the city from their strongholds in eastern Deir al-Zor and northern Raqqa.

Their capture of Palmyra raised international concerns they might destroy the city’s ancient ruins, as they have in other places in Syria and Iraq.

Though ISIS fighters have reportedly destroyed at least one statue, no damage to the ruins has been reported.

However, the group carried out at least one mass execution of government soldiers in Palmyra’s famed ancient amphitheater, later publishing footage of the killings online.