You are here: Home / Analysis / Syria and Yemen six years after the ‘Arab Spring’: prognosis for 2017
All Arab countries have autocratic governments. Six years ago, in the winter of 2010-2011 a spontaneous and exhilarating surge of massive protest demonstrations involving hundreds of thousands of common people swept across the Arab world, swiftly and peacefully toppling long entrenched dictators in Tunisia and Egypt within weeks, like reported by ipcs.org 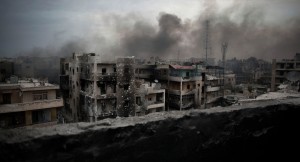 This unexpected success inspired the people of Bahrain, Syria and Yemen also to demand fundamental economic and political reform. However, the euphoria has turned out to be a cruel mirage. Seeing fellow dictators ousted, rulers resorted to brutal suppression of these protests; many foreign countries, taking advantage of the unrest, intervened directly and through proxies to promote their own geopolitical interests and in the process unleashed an unprecedented bloodbath and urban devastation worse than in World War II.

The net result has been that instead of the passionately hoped for new political and economic dawn, the people of Syria and Yemen are going through the darkest ever period in their modern history. West Asia has become deeply polarised due to a particularly noxious sectarian feud and a power struggle between Saudi Arabia and Iran. This is being chillingly exhibited in the blood soaked, exceedingly destructive developments in Iraq, Syria and Yemen. A vicious war has broken out within Islam. Muslims are killing other Muslims in an orgy of fanaticism with unprecedented ferocity. Radical Islam and terrorism in the name of Islam have become rampant and are creating mayhem even beyond the region.

All this was epitomised in the emergence of the Islamic State (IS) and its “Caliphate” in Iraq and Syria in June 2014 with its capital at Raqqa, Syria. Actions and policies of Turkey (which has been proactive); Saudi Arabia; the brazenly sectarian (mis)governance of Nouri al-Maliki in Iraq; policy omissions and commissions of Syrian President Bashar al-Assad and the US have been the main contributors to the advent and rise of this anachronistic phenomenon. At the peak of its power, the Islamic State controlled 40 per cent of Iraq and over 50 per cent of Syria; it is now less than 10 per cent in Iraq and less than 25 per cent in Syria.

To a very considerable extent, this success is due to the US led coalition conducting almost 10,500 air attacks against it from August 2014 till the end of 2016 in Iraq and just over 6000 from September 2014 in Syria. Russia too has carried out a large number of air attacks against the IS in Syria since October 2015. A full-scale assault to recapture Mosul, the last significant city that the IS controls in Iraq is currently underway as also efforts to recapture the IS capital, Raqqa.

But the third outcome is perhaps the most startling. The US, the world’s most powerful country after World War II, has been the architect and guarantor of security and stability in West Asia since then. Despite continuing to be the world’s leading economic and military power, continuing to have a strong military presence in the region, with its regional allies armed to the teeth with the latest state-of-the-art US equipment, the end of 2016 finds Washington in the rather bizarre and completely unfamiliar and unimaginable situation of being virtually marginalised in meaningfully influencing the shape of the emerging strategic landscape of the strategically vital West Asian region. This is not because other players have edged the US out but an almost inevitable consequence of outgoing US President Barack Obama’s very deliberately adopted (and trenchantly criticised both within and outside the US; but this author views it as statesmanlike for the longer term) retrenchment approach and refusal to get militarily involved in new conflicts in West Asia. The vacuum has been filled by Russia, which has emerged as the new power broker in West Asia with Iran becoming the most influential regional power.

SYRIA Credible estimates suggest almost 500,000 people have died in the many wars raging in Syria since March 2011; approximately 5 million people have fled the country and over 6.5 million people are internally displaced, cumulatively comprising over half the total Syrian population in 2011. The utterly devastating destruction of housing and infrastructure in its cities has left Syria a completely broken country where normalcy will not return, if ever, for decades.

Robust Russian military intervention since September 2015 in favour of Assad, and Iran’s consistently growing support and commitment to Assad – compelled by evolving circumstances; the steadily dwindling support for rebels from Turkey; Gulf Sunni States and the West; Assad’s finally taking full control over the psychologically and strategically vital Aleppo, Syria’s largest city and erstwhile commercial and financial centre, enabled by a ceasefire and evacuation of rebels brokered by Turkey and Russia; the focus of all major players increasingly shifting towards defeating the Islamic State – are all factors that have ensured that Assad can no longer be overthrown by military means.

In August 2016, Turkey launched operation Euphrates Shield, which envisages the creation of a Turkish military controlled ‘safe haven’ of over 5000 square kilometres of territory inside Syria to prevent any possibility of the Kurds creating an unbroken corridor under their control extending across the entire Syrian-Turkish border. In the closing weeks of 2016, a rather improbable and opportunistic alliance emerged consisting of Iran, Russia and Turkey, which has taken control of efforts to bring about peace in Syria, with the US and European countries being deliberately excluded from its meetings.

There will be serious and sincere Russia driven efforts for ceasefires and peace talks. Given US President-elect Donald Trump’s warm feelings for Russia and Russian President Vladimir Putin, a strategic partnership between the two in Syria is likely to fructify. This will boost the possibilities of moving forward towards ending the mayhem in Syria though collaterally working to Assad’s advantage. Russia and Iran will continue to be the dominant political foreign influence in Syria.
Turkey under President Recep Tayyip Erdoğan has been a particularly destabilising element in West Asia since the advent of the so-called Arab spring; and his frequent policy flip-flops suggest that Turkey will remain a spoiler rather than a constructive factor. Operation Euphrates Shield could cause new complications in Syria.
YEMEN
The inability of the former Yemeni President Ali Abdullah Saleh, a Shia but a protégé of the Sunni Saudi Arabia since 1991, to control the Arab Spring related unrest led to his ouster in the Saudi manipulated Gulf Cooperation Council (GCC) “mediation” in November 2011. In February 2012, he was replaced by Vice President Abdrabbuh Mansour Hadi, a Sunni, from Yemen’s south. Hadi’s inept and ineffective governance and his equally incompetent leadership of the military enabled the Houthis to take control of Sana’a in September 2014. Saleh opportunistically announced an alliance with the Houthis in March 2015 after his residence was attacked by Saudi planes. Despite eviction from office, given Saleh’s still enormous influence over the army, a significant part of the country (including Aden, albeit briefly) came under Houthi/Saleh control. Despite the relentless Saudi offensive, Houthis and their allies continue to maintain their hold over Sana’a, a significant part of the northern highlands, much of the coastal areas, and the important city of Taiz.

Justifying these developments as Iran posing an existential threat, Saudi Arabia, without any credible basis whatsoever, launched operation Decisive Storm on 15 March 2015, in alliance with a few GCC and other Sunni Arab countries. In a complete reversal of traditional under the radar foreign policy, this new muscular approach was initiated by the extremely ambitious, brash and completely inexperienced new Saudi Defence Minister, Mohammad bin Salman Al Saud, the favourite son of the new Saudi King, Salman bin Abdulaziz Al Saud. Heavy and indiscriminate aerial bombing has devastated Yemen, the poorest Arab country, causing approximately 10,000 deaths; displacement of 1.5 million people; and unimaginable destruction in its cities and infrastructure, leaving 86 per cent of its population in need of urgent and sustained humanitarian assistance.

Two side-effects of all these developments have been the very considerable enhancement of the influence and power of al Qaeda in Yemen and the ingress of the IS.

Prognosis:
Saudi Arabia cannot win this war and this realisation will finally sink in. The drain on Saudi resources will pinch ever more. The international community will finally be compelled to start pressurising Saudi Arabia to end this war. The unnatural and opportunistic alliance between Saleh and the Houthis will begin to crumble. Multi-pronged efforts will be initiated to organise ceasefires to enable humanitarian aid for the Yemeni people. As a result of all this, the intensity of the Saudi assault and internal civil war are likely to abate, setting the stage hopefully for a stop to all hostilities in 2018.
ISLAMIC STATE
Prognosis:
The IS as a territorial entity will almost certainly be militarily defeated before 2017 ends though small isolated pockets controlled by IS fighters will remain. The new IS tactics of carrying out high visibility high casualty attacks in Europe, Turkey, Egypt, Afghanistan, Pakistan, etc., would likely escalate. However, the ideology that inspired and underpinned the IS will remain to trouble West Asia and the world for a considerable time to come.