You are here: Home / MidEastGulf / Syria and the new Cold War

The risks of a western-Russian clash in the Middle East are as high today as they were back at the height of the Cold War. 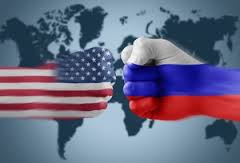 In 1973, an Arab-Israeli war almost led to a nuclear confrontation between two superpowers. The United States and the Soviet Union put their strategic forces on high alert after Israel breached the fragile ceasefire on both the Egyptian and the Syrian fronts. The crisis, however, soon abated in favour of a diplomatic solution. This episode represented the height of the Cold War (1945-1991) in the Middle East. For decades, the two competing superpowers armed and supported state and non-state actors in the region to further their interests, and to block the adversary’s geopolitical machinations.

The Cold War came to an end when the Soviet Union ceased to exist on Christmas Day 1991. Yet since Russian President Vladimir Putin came to power in 1999, and especially after the 2008 conflict between a resurgent Russia and Nato-backed Georgia, many pundits have begun to circulate the notion that a new Cold War between Russia and the West is imminent. It took another tense eight years, and the fracturing of Syria and Ukraine, for Russian Prime Minister Dmitry Medvedev to describe the strained relationship between his country and the West as a “new Cold War”. Speaking at the Munich Security Conference in Germany last weekend, Medvedev said he sometimes found himself wondering whether this was 2016 or 1962.

In 1962, the infamous Berlin Wall stood as the dividing line between the East and the West. Intellectuals, politicians and military strategists spent the second half of the 20th century pondering how a conflict might unfold across the European frontline, and what its trigger might be.

In 2016, the Berlin frontline and the Cold War, is reincarnated atop the restless ridgelines and on the open fields across the Syrian-Turkish border. The risks of a Western-Russian clash in the Middle East are as high today as they were back at the height of the Cold War, making it absolutely necessary to understand the dynamics, friction points and possible triggers of this renewed global conflict against the backdrop of an already complex war in Syria.

In early October 2015, the Russians began a fierce areal bombardment campaign to support unprecedented mass-scale operations by the Syrian Army. The stated aim was fighting terrorism, but the stakes were much higher. Facing Western sanctions and political isolation since 2013, Russia was seeking to reassert its status as a global power, no less able to project its influence and fight terrorism around the world than its old time adversary the US.

There were, however, many local and regional complicating factors. The mountains north of Latakia, Syria’s gateway to the Mediterranean, not only sheltered extremist factions, but were also home to a concentration of the Turkmen minority in Syria. Turkey, a Nato member, was watching restlessly as both its rebel allies and Turkic militants came under a relentless assault. Tensions came to a head on November 24 when a pair of Turkish F-16s shot down a Russian bomber over northern Latakia. The incident was the first direct confrontation between Russia and a Nato member since the Cold War.

Putin exploded following the incident. He labelled the Turkish action a “stab in the back”, from those who “support the terrorists”. Russia introduced economic sanctions against Turkey, and moved the state-of-the-art S-400 air-defence system into its airbase in Latakia. In addition, the Russians amped up the number of their fighter jets and bombers positioned in Syria, and deployed the “Moskva” missile cruiser, the flagship of Russia’s Black Sea Fleet, to its shores.

But the most direct form of Russian retaliation against Turkey was the intensification of the air campaign, especially near the Turkish border, which enabled the Syrian Army to recapture the city of Salma, the impervious rebel capital of Latakia province since 2012. From there, the Syrian Army continues to push north, and it’s now standing a mere four kilometres short of the Turkish border.

Putin did not stop there. He found an unlikely ally in the PYD, the Kurdish Democratic Union Party, and its military arm, the YPG — the Kurdish local protection militias in Syria. Back in October, the YPG had formed the backbone of the Syrian Democratic Forces, an allegedly American concoction aimed mainly at fighting Daesh (the self-proclaimed Islamic State of Iraq and the Levant). Few, however, imagined that the Kurds might play a double game, aligning themselves with both global powers at the same time. Both Russians and Americans had backstabbed them in the past. During the early years of the Cold War, the Soviets backed a Kurdish insurgency in northern Iraq against the country’s pro-Western monarchy. Then it was US secretary of state Henry Kissinger’s turn to incite another insurgency; this time it aimed to pin down the forces of a pro-Soviet regime in Baghdad, thus preventing Iraqi military aid to Syria in the 1973 war. Both episodes ended in thousands of Kurds being slaughtered.

The current battle for Aleppo began in the first week of February, right after the failed peace talks in Geneva between the Syrian government and the Riyadh-based opposition. The Kurds were excluded from the talks due to vehement Turkish opposition. Turkey was never comfortable with the rising power of the Kurds south of its border; it saw the YPG as an extension of the Kurdish Workers Party (PKK), which had fought the Turkish state for decades. Now, the Turks had to look on as the Kurds advanced under close Russian air support, routing groups loyal to Turkey in northern Aleppo. The Kurdish offensive coincided with another by the Syrian Army, which completely cut off the rebel supply route to the city of Aleppo. Turkish artillery support to the rebels in both Latakia and Aleppo was unable to reverse the tide.

In Syria, however, the combination of the Russian air defence umbrella and bombing raids, and the push towards the Turkish (Nato) border by both the Syrian Army and the Kurdish locals have turned the war-ravaged country into the primary frontier of a renewed confrontation between Russia and the West. Northern Syria, as opposed to eastern Ukraine, is the place where the risks of a Cold War turning hot are clear and present.

In the ongoing vicious game of power, all players have a motive to escalate, and the triggers are abundant. The Turks do not want their border to fall to unfriendly hands, and have threatened military action to stop the town of Azaz, the last rebel-held outpost north of Aleppo, from falling to either the YPG or the Syrian Army. The Syrian government wants to reach its border with Turkey, in order to reestablish its authority. Saudi Arabia wants to join the fray, claiming its intent to launch a ground offensive against Daesh with US support. The Americans, on their part, seem ambivalent about the recent development in Aleppo, merely urging restraint on all parties involved. The Russians want to exact revenge on Turkey, and to demonstrate the superiority of their weapons vis-à-vis Turkey’s Western-supplied military. Putin, above all, wants to outflank Nato; he needs to show the alliance as inept and unable to defend its members, let alone “contain” Russia.

If Russia and Turkey end up clashing over Latakia, Aleppo, or both, one critical question stands out: Will Nato implement Article 5 of its charter and confront Russia in defence of Turkey? Or will the Western powers choose diplomacy to avoid a clash with the nuclear-armed great power over an ever-entangled Middle East? The next few days may very well hold the answer.