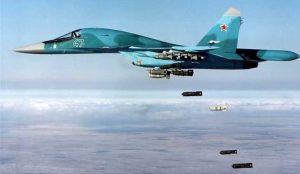 Syrian and Russian forces have launched a wave of air strikes against rebel-held areas in the south-west and pushed into a major town, resuming a wide-scale offensive after negotiations between Russia and the rebels collapsed, like reported by itv.com.

The government’s advance in the southern Daraa province, which began on June 19, has captured wide areas and forced an estimated 330,000 people to flee their homes.

Opposition activists claim scores of civilians have been killed.

State news agency SANA said Syrian troops entered the southern town of Saida after intense clashes with rebels, many of whom later withdrew to the nearby village of Taiba.

The Syrian Observatory for Human Rights reported some 600 air strikes in Daraa province, including on rebel-held parts of the contested provincial capital of the same name.

The Observatory said that with the capture of Saida, Syrian troops are now about four miles from the Naseeb border crossing with Jordan, one of the main goals of the offensive.

The opposition’s first responders said they evacuated the wounded from Daraa and nearby villages.

The latest wave of attacks comes after a four-day pause during which rebels negotiated with the Russians about how to end the violence. The air strikes resumed on Wednesday afternoon after the talks collapsed.

“These were not negotiations but pressures, dictations, threats and humiliations,” said Ibrahim Jabawi, spokesman for the rebels’ joint operations room.

He added that the Jordanians are working on resuming the talks between rebels and the Russians in south-western Syria.

In northern Syria, meanwhile, the Kurdish Hawar news agency reported an explosion in the town of Manbij, where dozens of people were demonstrating against the Turkish military presence in the country’s north.

The Observatory, which has activists around the country, said the blast wounded 10 people in the town, which has been at the heart of a dispute between the US and Turkey.

US-backed and Kurdish-led forces seized the town from the Islamic State group in 2016, but Turkey views the Kurdish fighters as terrorists because of their links to insurgents across the border and has demanded they withdraw.

Washington and Ankara recently reached a deal aimed at easing tensions that would see the Kurdish militia pull out, but it has not yet been implemented.