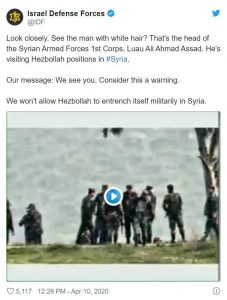 The Syrian military is continuing to support Hezbollah and allowing the terrorist group to gain a foothold in the Syrian Golan Heights, claimed IDF Arabic language spokesperson Avichay Adraee on Twitter, like reported by jpost.com.

The footage shows the commander of the new 1st Corps in the Syrian Armed Forces Luau Ali Ahmad Assad on a tour of the sites known to be used by Hezbollah accompanied by Hezbollah’s southern commander Hajj Hashem.

“Hezbollah’s presence in Syria in general and in the Syrian part of the Golan Heights in particular aims to create a terrorist infrastructure against the State of Israel with the cooperation and care of the Syrian regime,” tweeted Adraee, warning that Israel “will not tolerate this entrenchment!”

Adraee warned that Syria would be held responsible for all hostile actions from their territory. “The one warning has done his duty,” concluded the IDF spokesman.

The IDF’s English language Twitter account shared the footage as well, writing “We see you. Consider this a warning. We won’t allow Hezbollah to entrench itself militarily in Syria.”

Hajj Hashem, the Hezbollah commander mentioned by Adraee, was identified as Munir Naima Ali Shaito in a report by the Jerusalem Center for Public Affairs (JCPA). Shaito is in charge of recruiting locals in southwest Syria with financial incentives, with 3,500 local Syrians joining Hezbollah’s ranks since mid-2018, according to the report.

The Hezbollah commander has also been involved in the Syrian Civil War since the terrorist group got involved in 2013. He served as the deputy head of the Operational Unit for Palestine in 2000 and was promoted after the Second Lebanese War to the position of deputy commander of the elite Badr unit.

On election day in March, the IDF thwarted an attempted sniper attack along the Syrian border in the Golan Heights. The IDF claimed that Hezbollah operatives attempted to attack IDF troops from a Syrian military compound in the demilitarized zone in the northern Golan Heights. On March 2, the IAF struck a vehicle, killing one man believed to be a Hezbollah operative. Syria’s SANA news agency reported that Israel struck Syrian government forces, wounding three soldiers and killing one civilian.

In February, a man was killed in an alleged Israeli drone strike as he was driving his motorcycle near the village of Hadar in the Quneitra region located near the Israeli border. Syrian regime sources said the man was a civilian. But according to other unconfirmed reports, the man was identified as Emad al-Tawil, a Hezbollah operative active in establishing and entrenching a covert force in the Syrian Golan Heights that is designed to act against Israel.

The Golan Project has its headquarters in Damascus and the Lebanese capital of Beirut there are tens of operatives operating in the Syrian towns of Hadar, Quinetra and Erneh who collect intelligence on Israel and military movement on the Israeli Golan Heights.

According to the IDF, the Hezbollah militants involved in the clandestine project focus on familiarizing themselves with the Syrian Golan Heights and on gathering intelligence on Israel and the border area. They are also working to establish intelligence gathering capabilities against Israel, operating from civilian observation posts and regime military positions near the border.

Operatives involved in the clandestine file have weaponry available from the civil war and if needed, will receive additional weaponry from Lebanon or existing arsenals kept by Hezbollah and Iran.

The IDF believes that the next war on the northern border will not be contained to one front, but along the entire northern border with both Lebanon and Syria. The military also expects that during the next war Hezbollah will try to bring the fight to the home front by infiltrating Israeli communities to inflict significant civilian and military casualties.

Multiple airstrikes that Syrian media has accused Israel of carrying out have targeted sites throughout Syria, including sites allegedly run by Hezbollah and Iranian militias, in recent months and the past year.

The most recent airstrikes targeted areas near Homs, with damage reported at the Al-Shayrat airfield in the area. The Syrian Observatory for Human Rights reported that the airstrike targeted al-Shayrat airbase and sites belonging to Iranian militias near Homs.