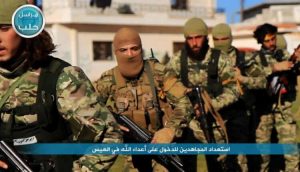 Abu Firas, a founding member of the al-Qaida linked militant group, was reportedly killed in the rebel held province of Idlib according to syriahr.com.

A prominent leader in Syrian al-Qaida offshoot al-Nusra Front was killed on Sunday in an air raid in the rebel held north-west province of Idlib alongside at least 20 other militants including foreign jihadists, rebels and a monitoring group have said.

The Syrian Observatory for Human Rights, which tracks violence in the country, confirmed reports on websites by militant sympathisers that Abu Firas, known as “the Syrian”, was killed in a suspected Syrian or Russian air raid on a village north-west of the city of Idlib.

Abu Firas was a well known figure who had many followers within the hardline group and who gave commentaries released by al-Nusra Front on sensitive issues ranging from governance to religious jurisprudence.

An Islamist source said Abu Firas was a founding member of the militant group who fought in Afghanistan in the 1980s and was a senior member of its policy making Shura Council. He also worked with Osama bin Laden.

The militant who supported the imposition of Islamic sharia across Syria was killed alongside his son and Uzbekistan fighters in a strike that also targeted the militant Jund al-Aqasa group in the village of Kafr Jales in mainly non-government-controlled Idlib province, the monitor said.

A fragile “cessation of hostilities” truce has held in Syria for over a month as the various parties try to negotiate an end to Syria’s five-year civil war.

But the truce excludes Islamic State and al-Nusra Front, and air and land attacks by Syrian and allied forces continue in parts of Syria where the government says the groups are present.