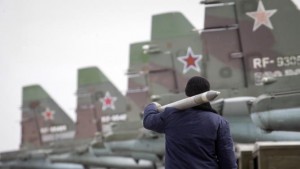 President Vladimir Putin has taken a risk by launching air strikes against Islamists in Syria because they could incite militants to seek revenge by attacking targets inside Russia.

The Kremlin has largely contained violence in Russia by cracking down hard but the bombardment of Syria could prompt global jihadists to put Russia on the list of targets they encourage their followers to attack.

Russia has suffered attacks by militants before, including suicide bombings in Moscow five years ago which killed dozens of people, and more now might turn public opinion against the military intervention in Syria.

Russia’s main breeding ground for radicals is in the mainly Muslim North Caucasus region, including the republics of Chechnya, Dagestan and Ingushetia, where Islamist insurgencies have been simmering for years.

In Ingushetia, local leaders have been urging young people to ignore calls to avenge the Russian bombing raids on Syria, which Moscow says has targeted Islamic State, as well as other Islamist groups opposed to Syrian President Bashar al-Assad.

‘In these conditions we can assume that the leaders of al Qaeda and other international terrorist organisations will try to take retaliatory measures,’ said Alexander Kumanyayev, head of the federal security service’s directorate in Ingushetia.

Such leaders would seek ‘to unleash a new round of terrorist war on the territory of our country. And this is a real threat, we cannot afford to underestimate it,’ he told a meeting of local security officials on the impact of the Syria operation.

TARGET ON THEIR BACKS

With its at times violent suppression of Islamist-backed separatist rebellions in the North Caucasus, Russia has for years been among countries considered by global jihadists as a target for attacks though the primary focus for Islamist militants has been the United States and its allies since US forces went into Iraq and Afghanistan.

By entering the Syria conflict, Russia could now join the front rank of Islamist targets, with the financing, recruiting, and ideological power of global jihadist networks potentially channelled into organising attacks on Russia.

The Russians ‘are no longer an indirect party to the conflict, they have a huge target on their backs,’ Steven A. Cook, a senior fellow at the Council on Foreign Relations, a US think tank, wrote in a commentary.

Russia’s main weak point is the North Caucasus, where underground insurgent networks are armed with light weapons and are sheltered by local residents. They already stage intermittent ambushes on security forces, some of them fatal.

The attack did not happen as the statement described, local officials said, but the episode showed that people operating under the banner of Islamic State were now in Russia.

Those groups could now step up their activities as part of a backlash over Russia’s intervention in Syria.

If they are seeking a high-profile act of violence to force the Russian public and the Kremlin to take notice, they would be likely to try to attack a civilian target in or near Russia’s big population centres.

These have happened before.

In 2002, armed Chechens stormed a Moscow theatre and held the audience hostage. Over 100 people were killed, most of them in the security operation to end the siege.

On March 29, 2010, suicide bombers set off twin explosions explosives on the metro system in central Moscow, killing 40 people. And on Jan 24, 2011, more than 30 people were killed in a suicide bombing at Moscow’s Domodedovo airport.

Security has been beefed up since then and there have been no successful attacks on civilian targets on such a scale. Metal detectors have been set up at metro station entrances and anyone entering airport buildings in Moscow has their bags scanned.

There is disagreement among Russia’s Islamists about whether they should target civilians, and in any case their capacity to stage attacks has waned in the past few years, said Simon Saradzhyan, a fellow at Harvard University’s Belfer Center.

‘One sign of how constrained the capabilities of these groups are is that their threats to stage attacks during the Sochi Olympic Games essentially failed to materialise,’ said Saradzhyan, an expert on post-Soviet states.

He said North Caucasus-based Islamist groups ‘can probably manage one or two spectacular attacks in the cities of ‘mainland’ Russia,’ but that staging a whole series is probably beyond their capability.

Forces loyal to the Kremlin have been sending signals that they will stamp out planned revenge attacks before they happen.

Valentina Matviyenko, a Putin ally and speaker of the upper house of parliament, said Russia’s security forces would be ready to snuff out such attacks.

Ramzan Kadyrov, the president of Chechnya, said on Thursday his security forces had killed three insurgents who, he said, had undergone training in Islamic State camps in Syria.

‘This is what will happen to anyone who even thinks about trying to take action against our republic or against the whole of Russia,’ Kadyrov said.

Russian officials say Syria is a training ground for Islamist insurgents, including several thousand with Russian passports who will return home and spread their violent ideology inside the North Caucasus, the officials say.

According to a person in Chechyna who works with state-approved Muslim clerics, an order has gone out from the local government to preach in mosques about the pitfalls of joining Islamic State.

‘We know they have powerful methods of influencing young peoples’ consciousness,’ said the person, who did not want to be identified because of the sensitivity of the subject.

Many young Chechens still slip through the net.

‘Our lads, and lately our girls too, have started going to join the war in Syria, saying it’s like a holy war’, said a Chechnya resident who gave her first name as Larissa.

‘Unfortunately, the young people go there without telling their parents and not everyone is able to bring them back. Some are brought back en route, some are found in Turkey, and some come back as corpses,’ she said.