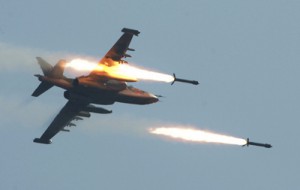 Warplanes believed to be part of a U.S.-led alliance struck Nusra Front positions in northern Syria on Friday following an attack by the al Qaeda-linked group on Western-backed rebels in the area, a group tracking the war said.

The Syrian Observatory for Human Rights, a UK-based group that reports on the war, said the air strikes hit Nusra Front positions near the town of Azaz, north of Aleppo.

Overnight, the Nusra Front had launched an attack in the area targeting rebels including a group said by opposition sources to have been trained under a U.S.-led programme to build a force to fight Islamic State, the Observatory reported.

The rebel group, known as Division 30, said Nusra Front fighters attacked its headquarters at 4.30 am. Five members of Division 30 were killed as they held off the attackers, it said.

The group has accused the Nusra Front of abducting its leader and several other members earlier this week.

Syrian opposition sources say members of Division 30 have been trained under the U.S.-led train and equip programme launched in May. The Pentagon has however cast doubt on the report, saying that no members of the “New Syrian Force” had been captured or detained.

The Nusra Front, which Washington has designated a terrorist organisation, has a track record of crushing U.S.-backed rebels in Syria. Last year, it routed the Syria Revolutionaries Front led by Jamal Maarouf, viewed as one of the most powerful insurgent leaders until his defeat.

It was also instrumental in the demise of the U.S.-backed Hazzm Movement, which collapsed earlier this year after clashing with the Nusra Front in the northwest.

Washington and Ankara this week announced their intention to provide air cover for Syrian rebels and jointly sweep Islamic State fighters from a strip of land along the border, with U.S. warplanes using bases in Turkey for strikes.