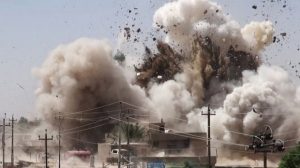 The main propagandist of the Daesh terrorist group in Syria has been killed in an airstrike by the Iraqi Air Force, which led to the demise of the militants’ propaganda network in Syria, Alsumaria broadcaster reported Thursday.

On Monday, the Iraqi command of joint operations against the Daesh in Iraq and Syria reported that fighter jets had attacked and destroyed a Daesh command post in the south of the Dashisha area in Syria.

The militant, known as Abu Baraa Shami, who headed Daesh propaganda in Syria, was killed in the attack, the Alsumaria broadcaster reported, citing a source in Iraqi intelligence.

The terrorist directed the production of video materials, including videos of massacres and torture, and the information structure of the militants collapsed after his demise, the source added.

Iraq carries out strikes against the Daesh in Syria when it receives intelligence about threats to its security. On April 19, Iraqi Defense Ministry spokesman Tahseen Khafaji told Sputnik that the airstrikes had nothing to do with the international US-led coalition.

Later that month, Fares Shehabi, a member of the Syrian parliament for Aleppo and chairman of the Syrian Federation of Industry, told Sputnik that Iraqi airstrikes on Daesh positions in Syria would be always approved by Damascus as long as there is a mutual agreement between the two countries on the matter.