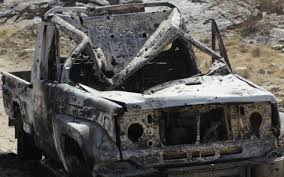 The site said the targeted cars were carrying a “monitoring and inspection” committee of military experts who came from Iraq two days ago to inspect the Iranian Revolutionary Guards’ positions in Deir Ez-Zor.

According to the site, the committee included 15 “military experts” from Iraq, Iran and Afghanistan.