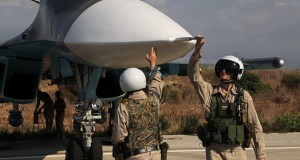 At least 3,000 militants from ISIS and jihadist groups Jabhat Al-Nusra and Jaish al-Yarmouk have fled from Syria to Jordan over fears the Syrian army is advancing on all fronts and for the Russian air raids, Ria Novosti reports, citing a military source. Some 160 jihadist militants have been reportedly killed yesterday during an attack carried out by the Syrian army in Deir Ezzor province while 17 others died in an attack in Homs and Palmyra.

According to the same source, the Syrian army yesterday launched an offensive in the outskirts of Damascus, in the provinces of Deir Ezzor and Homs, as well as close to the city of Palmyra. This morning, instead, according to Ria Novosti, Syrian army helicopters launched leaflets in the southern part of Hama province, calling on terrorists to surrender and warning civilians that a major military operation was beginning.

On Saturday, a Syrian fighter jet reportedly violated Turkish air space in Hatay province, close to the Syrian border, according to the Turkish foreign ministry. Russian Ambassador Andrey Karloc was summoned to express Turkey’s protests with the threat of retaliatory actions in the event of similar incidents in future.