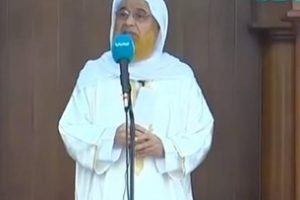 A Libyan Imam has received CHF600,000 ($620,000) in state welfare payments while preaching messages of hatred against other religions from a mosque in Biel, Swiss public television has discovered, like reported by swissinfo.ch.

The Rundschau news programme obtained a recording of Abu Ramadan preaching: “Oh Allah, I beg you to destroy the enemies of our religion. Destroy the Jews, Christians, Hindus, Russians and the Shia.” The sermon was delivered at the Ar’Rahman mosque in canton Bern.

“He who befriends a disbeliever is cursed until the Day of Judgment,” the Imam preached. He also suggested that Muslims should not be subject to local laws. “If you tell me that a Muslim has stolen or raped…that does not matter to you, and you should not talk about it,” he has been recorded as saying.

Research by Rundschau and the Tages Anzeiger newspaper revealed that the Imam has been receiving regular unemployment and other benefits for the last 13 years from the local authorities at his home town of Nidau.

While there is no suggestion that he received the payments illegally, or that the authorities have broken any regulations, the hate preaching revelations have prompted local politicians to look into the case. One has suggested that the Imam should be expelled from Switzerland.

Christian Hauri, who heads the local social welfare department, told Rundschau that “we are not responsible for protecting the state. We do not have the means to research our clients.”

It is not known whether Imam Abu Ramadan is being investigated for instigating hate or violence towards other religions. In a statement to Rundschau, he denied that his preaching attacked Switzerland or the Western world, but admitted speaking out against Israel and Zionist ideology.

According to the media reports, Abu Ramadan does not speak German or French and only rudimentary English, which virtually excludes him from the job market.

Journalists have discovered that the Imam preaches both in Biel and Neuchâtel, along with appearances on the Libyan Islamic propaganda channel Tanasuh TV.

Abu Ramadan also escorts clients of the Geneva-based Muslim travel agency Arabian Excellence AETS on tours to Mecca. Rundschau found Facebook entries showing Abu Ramadan in luxury hotels in the Middle East, but the Imam claims that he only gets his daily living expenses covered on such tours.

“This is someone who does not call directly for jihad but creates the mental breeding ground for it,” Saïda Keller-Messahli, who campaigns in Switzerland against radical Islam, told Rundschau.